Manufactured on Luna II, the GM Quel was developed using the EFSF's own technology and capabilities as a demonstration of the early Titans' commitment to their "Terra firma" policies, despite gaining the expertise and support from numerous military and civilian contractors, such as the Zeonic Company and Anaheim Electronics after the war. Using the Augusta base's high-performing RGM-79N GM Custom model as the basis of their new design, the Titans redeveloped the GM Custom, simplifying it to make the unit lighter and less complex for the ease of mass production, while keeping its high performance standards relatively unaffected. Any loss of durability and/or reliability as a result of the simplification process was made up by introducing new, innovative design concepts and technology into the machine. One such example is the design of the GM Quel's new arm unit, which would later further evolve into the Movable Frame concept utilized by the RX-178 Gundam Mk-II and the next generation of Variable (transformable) Mobile Suits (VMS).

While essentially just an updated version of the GM Custom, the GM Quel however does feature various minor improvements over its predecessor. The shape of its forehead, chest and shoulder armor has been streamlined, and high performance multi-purpose sensor units have been installed on the lower calf area of both legs and on the slope above the left chest intake. The performance of the existing sensor and communications equipment on the head unit has also been improved. These electronic upgrades allow the GM Quel to better monitor its surrounding environments and civilian populations while on peacekeeping duties. And due to the increased funding and resources enjoyed by the Titans, the GM Quel has also gained the option of being armed with Beam weaponry, significantly improving its firepower. However some colonial garrison units have opted to retain their standard issue GM Rifles instead, so as to minimize and/or avoid causing collateral damage to colony walls.

A specialized equipment testing and evaluation team, known as "Titans Test Team" or "T3 Unit", uses the GM Quel as the basis for their development of the next generation RX-121 series Gundam-type MS. Performance testing of these prototypes are carried out in actual combat scenarios, much like the venerable RX-78 Gundam Series, against Zeon remnants. By the beginning of the Gryps Conflict in U.C. 0087, the GM Quel, along with other GM series mobile suits such as the RMS-179 GM II, was considered to be out-dated, and was gradually replaced as a frontline unit by the EFSF and the Titans with newer mobile suits such as the RMS-106 Hizack and the RMS-108 Marasai. Temporary Titans units made up of ordinary Earth Federation Forces use GM Quel painted in red and white Federation colors.

A basic armament of the RGM series of mobile suits is a pair of head mounted 60mm vulcan guns. These shell firing weapons have a high rate of fire but little power, however, they are effective at close range and commonly employed to deter an enemy mobile suit from getting too close. They are also ideal for shooting down small, lightly armored targets such as missiles, small vehicles, etc.

The 90mm GM rifle is one of several ranged armaments that the Earth Federation regularly equipped their GM mobile suits with. Because the GM Rifle is a simple shell-firing machine gun that is based on older technologies, it has no where near the power of a beam rifle, but can be cheaply produced and easily maintained. It features different barrel, sensor unit, stock and magazine configurations that allows for different ballistic and handling properties. The ammunition is stored in spare magazines that can be replaced when they are used up.

A beam weapon originally used by the RGM-79［G］ GM Sniper during the One Year War, it mounts a high-powered scope, allowing the pilot to hit distant targets with pinpoint accuracy. During the events in MSV-R: The Return of Johnny Ridden, the P.M.C. Themis' GM Quel is equipped with this weapon.

Technically a large rocket launcher it could fire several 360mm missiles to attack targets at long range. No mass-production MS's armor is able to stop this weapon. While very powerful, it has a slow rate of fire and a fairly little amount of ammunition.

A shield is a thick sheet of armor designed to take severe punishment that would normally destroy a mobile suit. Shields are also treated with an anti-beam coating to withstand several beam shots before the coating wears off. GM Quel's shield can be equipped on either arm and can carry two spare magazines for the GM Rifle.

Following the partial success of Operation Stardust in the Delaz Conflict, Admiral Jamitov Hymen of the EFSF partitioned for the creation of a specialized counter-insurgency group which could act outside of conventional Federation jurisdiction in order to hunt down and repel any anti-government groups and activities. Knowing that his proposition would soon come to pass, he motioned many of his plans forward in advance in anticipation of its eventual realization. He secretly ordered the development of a high quality mass-produced mobile suit which would serve as the mainstay combat unit in his new organization. When the Titans elite unit was finally formally established in December, U.C. 0083, the first production batches of the GM Quel had already rolled off the assembly line and was immediately assigned for active duty. This showcases the genius of Jamitov Hymen in politics and manipulation.

The overall dark paint scheme first introduced by the GM Quel would later be selected as the official "Titans color" and applied on many other mobile suits produced by the Titans. The GM Quel would continue to serve the Titans until the onset of the Gryps Conflict in U.C. 0087, where they are replaced by more advanced mobile suits created as a result of the arms race between the participating factions.

The ReZeon is known to have used GM Quel units, which presumably come from either the Titans deserters within the organization, or being captured from the E.F.S.F. 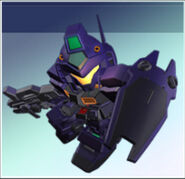 GM Quel on colony patrol as seen on Gundam Legacy 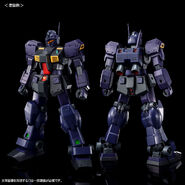 Retrieved from "https://gundam.fandom.com/wiki/RGM-79Q_GM_Quel?oldid=435421"
Community content is available under CC-BY-SA unless otherwise noted.