The RGM-79L GM Light Armor is a variant of the RGM-79 GM that first appears in the Mobile Suit Variations series.

The GM Light Armor was made alongside the RGM-79SC GM Sniper Custom to meet the demands of some ace pilots who wanted improvements to their RGM-79 GM. Based on the premise of beam weaponry being the decisive factor in battles as a single beam shot can critically damage a mobile suit, the GM Light Armor undergoes comprehensive armor reduction (thinner armor and loss of shoulder and ankle armor) in exchange for higher mobility to enable it be a speedy unit for hit-and-run attacks. As a result, this machine was favored by many of the Federation Forces' ex-Fighter pilots.

An energy CAP-type beam firearm, it has a limited number of shots, but high destructive power. As a result, hit-and-run attacks with this weapon can disable enemy units.

A basic defensive armament used by the Federation's GM type MS. It is composed of a triple honeycomb structure made of Luna Titanium and the surface also has anti-beam coating for defending against beam attacks. 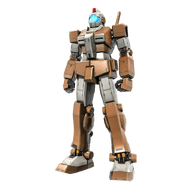