The RGM-79LV GM Night Seeker II is an Earth Federation mobile suit specialized in night attacks. It is a rebuild of the RGM-79V GM Night Seeker with only the bare minimum of armor, thus reducing its weight and giving it more acceleration and maneuverability. After being dropped from the CB-X5SGT Gunperry Sturm Type and landing on the target area, the GM Night Seeker II's thruster units can be jettisoned via explosive separation bolts for more mobility. Like the original GM Night Seeker, the GM Night Seeker II's sensor range can be increased via the equipping of targeting sensors in the "face guard" visor over its standard sensors. The full operation of the thrusters allows for a jump flight of up to 400m, and will be used to return to the transport squadron after completing the mission.

The standard close range armament for most mobile suits, it is a small device held in the mobile suit's hands when operated and is powered by a rechargeable energy capacitor. The beam saber emits a blade of plasma contained by an I-Field and can cut through most armor not treated with anti-beam coating. The GM Night Seeker II has one beam saber stored on its backpack.

The bullpup machine gun was a system weapon developed as a Space/Ground dual use projectile weapon. Though compact, it has sufficient anti-MS firepower while maintaining accuracy. Its muzzle velocity is increased due to the use of new gunpowder and this enables it to easily penetrate the armor of Zeon's mobile suit. A box-like sensor system incorporating a video camera and laser sensor is installed at the top, and when this system is used alongside the GM Night Seeker II's targeting system, target acquisition capability is enhanced. 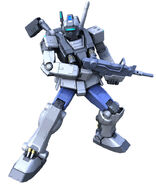 Retrieved from "https://gundam.fandom.com/wiki/RGM-79LV_GM_Night_Seeker_II?oldid=456738"
Community content is available under CC-BY-SA unless otherwise noted.