The RGM-79KC GM Intercept Custom is a variant of the RGM-79SC GM Sniper Custom. It first appeared as a part of the MSV-R line and Legend of the Universal Century Heroes: MSV-R.

The beam saber is a small device held in the mobile suit's hands when operated and is powered by a rechargeable energy capacitor. It emits a blade of plasma contained by an I-Field and can cut through most armor not treated with anti-beam coating. The GM Intercept Custom has one beam saber stored on the rear waist armor. It is positioned so as not to interfere with the Fellow Booster.

A handheld beam gun with a lower focusing rate than a beam rifle and short range. The beam spray gun features three different firing modes: a basic single shot mode, a burst shot mode for area suppression, and a range shot mode that scatters the beam to cause damage over a wide area. Output 1.4 MW.

An improved version of the beam spray gun that was redesigned for the Sniper Custom series.

The R-4 type beam rifle was designed specifically for the Sniper Custom series, its range and output have been increased, but it has a smaller ammo capacity. The rifle's barrel, stock, and scope can be folded when not in use.

A pair of missile launchers are mounted on each side of the Fellow Booster.

An optional MS-use Bazooka developed for the GM Series. Besides having enhanced accuracy due to the sensor mounted on top of the weapon, it is also lightweight, easy to use and has high shooting performance.

Following the successful development of the RGM-79 GM, the Earth Federation began working on armament unit that could enhance the mobile suit's operational range and firepower. Although there existed the G-Armor that served similar role for the RX-78 Gundam, due to cost and production issues, the Earth Federation decided on developing new armament units. The space-use Fellow Booster was developed after the development of the atmospheric use Lightliner and Corvette Booster. The Fellow Booster is armed with a pair of missile launchers and used the same frame as the Corvette Booster, thus it could be produced on the same production line. Thanks to its excellent performance, an additional 45 units were ordered during the post-war period. 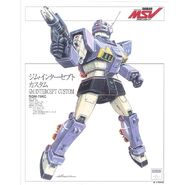 Equipped with the Hyper Mega Launcher 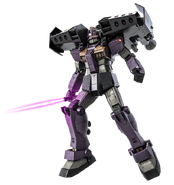