The RGM-79HC GM Guard Custom is a variant of the RGM-79SC GM Sniper Custom. It first appears as a part of the MSV-R line and Legend of the Universal Century Heroes: MSV-R.

The GM Guard Custom is a minor change variation of the GM Sniper Custom developed during the final stages of the One Year War. It has enhanced defensive capabilities as it was developed primarily to defend allied units, and to guard the fleet as well as various military facilities.

As the GM Sniper Custom served as its base machine, the GM Guard Custom maintains high mobility yet has high defensive abilities thanks to its huge shield - the "Guardian Shield". During combat, a movable visor on the head would be lowered and it is equipped with composite sensor system.

The high performance of the machine resulted in it being difficult to pilot, thus it is mainly piloted by skilled mobile suit pilots. This also contributed to many of the GM Guard Customs surviving the war.

A standard armament of Earth Federation Forces' MS, the GM Guard Custom has two 60mm vulcan guns on its head. These shell firing weapons have a high rate of fire, but can't damage the armor of MS due to their low power. However, they can damage lightly armored areas such as the sensors, and are ideal for shooting down small, lightly armored targets such as missiles, attack vehicles, etc. The 60mm vulcan guns are usable only when the movable visor on the head is lowered.

Besides the 60mm vulcan guns, the GM Guard Custom has another two vulcan guns of unknown caliber on the top of its torso.

A weapon that emits a short beam blade for close combat, the GM Guard Custom stores two beam daggers in forearm-mounted cases. Capable of emitting their beam blades while stored, allowing for direct use, they can also be taken out from their cases and used as handheld weapons.

A beam saber is a small cylindrical device held in the mobile suit's hands when operated and powered by a rechargeable energy capacitor. It emits a blade of plasma contained by an I-Field and is capable of cutting through any material not treated with anti-beam coating. The GM Guard Custom stores two beam sabers in an unknown location.

A redesigned version of the RGM-79 GM's beam spray gun, the GM Guard Custom can carry a pair of E-2 beam spray guns that are stored on the side armor when not in use. Beam spray guns are essentially beam rifles in a smaller, weaker form, and fires a less powerful but more scattered shot. As a result, beam spray guns are less effective at long range, but is better at close range due to a more spread out shot, similar to a shotgun effect.

A characteristic custom armament created for the GM Guard Custom, the guardian shield is a huge shield that consisted of five layers made of four different metallic alloys. This design is meant to protect against penetration by and impact from physical projectiles. The shield also has anti-beam coating on its surface to defend against beam weaponry. The effectiveness of this shield can be seen by the high number of GM Guard Customs that survived the war.

Two vulcan guns are mounted on the sides of the shield. They allow the GM Guard Custom to attack its enemies while hiding behind the guardian shield.

During the One Year War, after the destruction of Solomon, a GM Guard Custom along with a RGM-79SC GM Sniper Custom, a RGM-79KC GM Interceptor Custom and several GM units pursued Dozle Zabi's Gwazine-class until they were intercepted by Zaku IIs and Rick Doms. 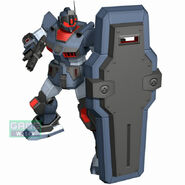 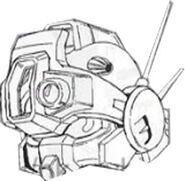 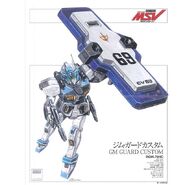 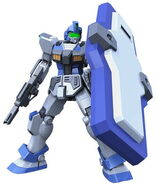 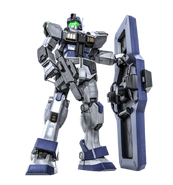 Retrieved from "https://gundam.fandom.com/wiki/RGM-79HC_GM_Guard_Custom?oldid=438536"
Community content is available under CC-BY-SA unless otherwise noted.