The RGM-79G GM Command is a Mobile Suit built by the Earth Federation Forces and developed from the RGM-79D GM Cold Districts Type. It is first featured in the anime mini-series Mobile Suit Gundam 0080: War in the Pocket.

Following the success of the RGM-79D GM Cold Districts Type, a late production type GM deployed in the One Year War, development of new localized warfare machines using the suit as a basis started.[1] The basic concept is to maintain the fundamental design of the GM Cold Districts Type while improving on its output and mobility.[1] Demands of MS pilots who were unsatisfied with the original RGM-79 GM's performance were also taken into account, and with the upcoming counter offensive in space against the Principality of Zeon in mind, a decision was made to simultaneously developed a ground use unit and a space use unit.[1] The end results were the ground use GM Command, and the space use RGM-79GS GM Command Space Type.[1] Both suits were also used to collect data for the development of next generation mass production models.[2]

The GM Command is also called the "Colony Type" as it specialized in defending bases in space colonies and surrounding areas.[2] For this reason, its output and weaponry were adjusted to reduce fatal damage to the colony's structure and walls.[2] Specifications wise, the GM Command series is said to be a match for the Zeon's MS-14A Gelgoog, but as many of the machines were deployed to areas outside of the main battlefield that had low urgency, its functions were often suppressed and it could not display its full potential.[2] To improve on the GM Cold Districts Type’s mobility, the GM Command series’ thrusters are distributed all over its body.[1] Furthermore, the backpack, which contains the main propulsion system, was also boldly redesigned and optimized separately for the GM Command and GM Command Space Type.[1] The placements of the thruster verniers on the GM Command's backpack are optimized based on simulations of operation within colonies, and they are pointed downwards for movements under gravity.[1][2] Various sensors are also added to the backpack, replacing the normal GM's backpack beam saber rack.[2]

Due to the accumulation of manufacturing and designing knowledge, the GM Command series' maintainability and operability was greatly improved compared to the very first mass production models that had inconsistent standards.[2] Unlike the normal GM, the GM Command series has additional sensors in the head such as environment monitoring sensors to thoroughly detect human presence/survivability, and this boosts the suit's anti-personnel and anti-material evasive capabilities.[2] The GM Command series is also the first in the GM series to utilize mono-eye camera in the head to improve producibility.[1] Communication capabilities are enhanced via the shoulder antenna, which also helps to prevent interferences or jamming caused by frequency bands used by civilians inside and outside of colonies.[2] It was relatively easy to change the GM Command series' armor, backpack, and other parts; furthermore, its specifications can also be changed with little modification to the base structures.[2] The suit served as the base for the RGM-79SP GM Sniper II.

These shell firing weapons have high-rate of fire but little power, and can't damage the armor of a mobile suit, though they can damage lightly armored areas such as the sensors. They are ideal for shooting down small, lightly armored targets such as missiles, small attack vehicles, etc.

The standard close range armament for most mobile suits, it is a small device held in the mobile suit's hands when operated and is powered by a rechargeable energy capacitor. The beam saber emits a blade of plasma contained by an I-Field and can cut through most armor not treated with anti-beam coating. The GM Command has two beam sabers stored on its rear skirt armor.

A shield made of titanium/ceramic composite developed near the end of the One Year War. Thanks to its curved shape and an anti-beam coating with a higher heat resistance than previous models, it is more resistant against both ballistic and beam weapons. There is an opening at the top of the shield for the shoulder vernier to go through. The inside of the shield has a weapon latch, which can be used to store various equipment and two spare magazines. Since it was mostly used by GM Command, the shield was colloquially known as the "Command Shield".[1]

The bullpup machine gun was a system weapon developed as a Space/Ground dual use projectile weapon. Though compact, it has sufficient anti-MS firepower while maintaining accuracy. Its muzzle velocity is increased due to the use of new gunpowder and this enables it to easily penetrate the armor of Zeon's mobile suit. A box-like sensor system incorporating a video camera and laser sensor is installed at the top, and when this system is used alongside the GM's targeting system, target acquisition capability is enhanced. The machine gun's 90mm ammunitions are compatible with the machine guns used by the military vehicles at the time.[2]. When the gun's magazine is empty, it can be discarded and replaced with one of the two spare magazines stored on the back of GM Command's shield.

An optional backpack equipment created by the Federation for use by their mobile suits for paradrop missions from the Medea Transport Plane. It contains three parachutes and four thrusters to help in making a safe descent to the ground, once touchdown had been accomplished the backpack is ejected.

The GM Command was built in the last weeks of the One Year War, however they were never produced in the numbers to make a difference to the Federation's war effort. Most that were built typically did not see front-line action, instead being regulated to colony and base defense. A number of these machines were assigned to the Federation forces stationed at the Neutral Side 6 Libot Colony, at least three of which were assigned to Gray Phantom's Scarlet Team. These mobile suits would battle with the Zeon forces' mobile suits that had infiltrated the colony in search of Federation activity. Initially, the Federation was hesitant to aid the colony in their defense, but they had no choice when the Zeon's MS-18E Kämpfer appeared to be too much for the Colony defense forces. However despite being superior to the standard GM and had already defeated several MS-06FZ Zaku II Kai several days earlier, the Kämpfer was too much and wiped out all of Scarlet team's mobile suits, as well as anything else that stood in its way until it reached the Gundam. During U.C. 0081,some GM Command units were assigned to the Phantom Sweep Corps for their battles against Zeon Remnants, these units featured the team emblem on their shields.

The initial production version of the GM Command. Some units were used by the Guinea Pig Team, one of the Federation's experimental corps. This model used the same backpack as the RGM-79D GM Cold Districts Type. 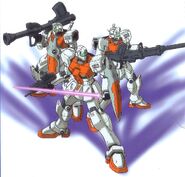 Captured and used by Zeon Forces 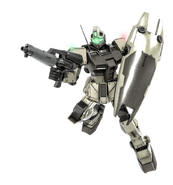 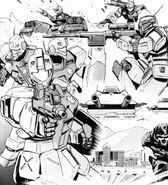 Retrieved from "https://gundam.fandom.com/wiki/RGM-79G_GM_Command?oldid=456717"
Community content is available under CC-BY-SA unless otherwise noted.