The RGM-79F GM Land Combat Type is a variation of the RGM-79 GM. It first appeared as a part of Kunio Okawara's Missing Mobile Suit Variations.

A locally modified, ground use version of the RGM-79 GM, the GM Land Combat Type is primarily deployed in the European front late in the One Year War. The most notable modification is the enhanced armor on its upper body. This came about as obstacles on the ground, such as trees and buildings, resulted in mobile suits' upper body having an abnormally high chance of being hit by enemy attacks during battles. The enhanced upper body armor could withstand attacks from a Zaku machine gun, increasing the pilot's survival rate. To compensate for the added weight, it was fitted with a new backpack with six thruster nozzles.

Mounted in the head, the pair of shell firing weapons have a high rate of fire but little power and can't damage the armor of a mobile suit, though they can damage lightly armored areas such as the sensors. They are ideal for shooting down small, lightly armored targets such as missiles, small vehicles, etc.

The standard close range armament for most mobile suits, it is a small device held in the mobile suit's hands when operated and is powered by a rechargeable energy capacitor. The beam saber emits a blade of plasma contained by an I-Field and can cut through most armor not treated with anti-beam coating. The GM Land Combat Type is equipped with one beam saber stored in its backpack.

A weapon that uses electromagnetic forces, rather than gunpowder, to fire solid projectiles at very high velocities. Manufactured by Yashima Heavy Industries. This equipment was developed in consideration of the problems that the early beam weapons had (decreased power due to attenuation in the atmosphere), and the basic structure is diverted from a battleship's main gun.

A type of beam spray gun with a high convergence rate to reduce beam attenuation in the atmosphere.

The GM Land Combat Type was mostly deployed in the Europe region. It later served as the basis for the RGM-79F Desert GM.

With Railcannon as featured in Gundam Chronicle Battline card game

As seen on Gundam Legacy 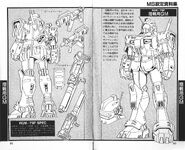