A close-combat variant of the RGM-79C GM Type C, the GM Striker features wearable armor that protects the suit as it charges towards the enemy. It also has a close combat visor to better protect its head's sensors. The GM Striker focuses on close combat with only a standard 100mm machine gun to engage in range combat. For melee combat, it has access to a standard beam saber, a spike shield, and a long twin beam spear that was based on the RX-78-2 Gundam's beam javelin. It features improved thrusters on the legs and backpack with higher output so that it can close in onto the enemy rapidly.

Mounted in the head, the pair of shell firing weapons have high-rate of fire but little power, and can't damage the armor of a mobile suit, though they can damage lightly armored areas such as the sensors. They are ideal for shooting down small, lightly armored targets such as missiles, attack vehicles, etc.

The GM Striker has a beam saber stored in the right side of the backpack. The beam saber is a small device held in the mobile suit's hands when operated and is powered by a rechargeable energy capacitor. The beam saber emits a blade of plasma contained by an I-Field and can cut through most armor not treated with anti-beam coating.

A shield designed specifically for the GM Striker, this defensive armament can also be used as a striking weapon thanks to the two pile bunkers mounted at the tip.

Adds extra protection to the head mounted sensors while not interfering with the use of the vulcan guns.

A set of add-on armor mounted all over the body of the GM Striker, it protects the suit as it charges towards the enemy and can be purged when not required. The wearable armor functions like reactive armor, it has internally-mounted explosive that would explode when hit to diffuse the impact of enemy's projectiles outwards. This armor is a further development of the RGM-79F Desert GM's reactive armor.

A mobile suit scaled version of a hang glider. 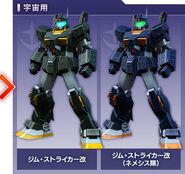 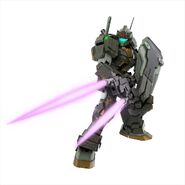 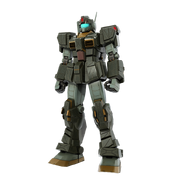 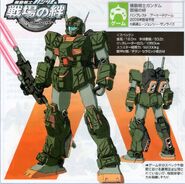 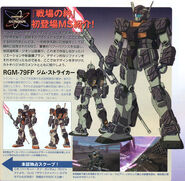 MS Info for Mobile Suit Gundam: Bonds of the Battlefield

Retrieved from "https://gundam.fandom.com/wiki/RGM-79FP_GM_Striker?oldid=457142"
Community content is available under CC-BY-SA unless otherwise noted.