This improved model of the Desert GM was similar to its predecessor in overall capabilities. However, the Armored GM featured high output boosters to facilitate quick movement and to compensate for its heavy armor.

The standard close range armament for most mobile suits, it is a small device held in the mobile suit's hands when operated and is powered by a rechargeable energy capacitor. The beam saber emits a blade of plasma contained by an I-Field and can cut through most armor not treated with anti-beam coating. The Armored GM has one beam saber stored in its backpack.

The Armored GM can also use the same forearm-mounted shield as the Gundam Ground Type and GM Ground Type. This small, light shield is constructed of Luna Titanium alloy, and is designed to primarily protect the cockpit and other critical areas. Additionally, it can be used as a close range striking weapon in mobile suit combat. Furthermore, through lodging the spikes at the tip into the ground, the shield can serve as a free standing frontal defense. This also allows the mobile suit to use both hands to hold large caliber weaponry and maintain a stable firing position.

The Armored GM was not deployed until very late in the One Year War and was designed primarily for ground combat. One of the few recorded instances of the Armored GM being fielded was January 1, UC 0080, in the vast stretches of the deserts of North Africa. The Midnight Fenrir Corps, answering a distress call from several HT-01B Magella Attack tanks attached to Number 11 Supply Corps, fought off several waves of attacks by standard GMs, supplemented by a squad of the new Armored GMs. 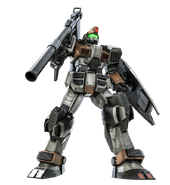 Retrieved from "https://gundam.fandom.com/wiki/RGM-79FD_Armored_GM?oldid=504069"
Community content is available under CC-BY-SA unless otherwise noted.