The Striker Custom is a next generation type mobile suit developed from the GM Striker. Like its predecessor, the Striker Custom is also an ace-use machine specialized for close combat. The Striker Custom retains the body of a GM Striker, but has a new backpack and Gundam-like head. The new backpack is meant for storing some of the Strike Custom's newly designed weaponry which incorporates technology previously used by Zeon. The Gundam-like head contains a special "Demon Blade" AI System that can awaken the latent Newtypes capabilities of its pilot and can create a special dust-like, ultra-vibrating material for offensive purposes.

A pair of 60mm gatling guns mounted on the sides of the Striker Custom's head. Having the greatest rate of fire of all the Striker Custom's weapons, they are primarily used to ward off advancing enemies, shoot down missiles and the likes, and as anti-aircraft and anti-personnel weapons.

Standard close combat equipment of most Federation Mobile Suit. Striker Custom has two beam sabers stored on the backpack. The beam sabers use Minovsky particles held in place by an I-Field to form an effective cutting surface that can slice through most armor without anti-beam treatment.

Other than two standard Beam Sabers, the Striker Custom is also armed with two Custom Beam Sabers stored in its backpack. The hilts of these sabers are bigger than normal, and capable of emitting a much longer and more powerful blade that can slice through several mobile suits in a single swing. These Custom Beam Sabers also have a variety of uses, such as in a claw-like fashion or combined to form a 'Twin Beam Saber', a dual blade weapon similar to the Zeon's Beam Naginata.

The Burst Knuckles were the suit's specialized explosive mines, detonated by punching impact. It is developed using the Zeon's chain mine technology.

The "Demon Blade" AI System is incorporated into the head of the Striker Custom. Created as part of a Cyber Newtype project under Kanesada Tsurugi, it is based on the EEG waves of Ittou Tsurugi, who showed indications of being a Newtype. The system's purpose was to awake the latent Newtype capabilities in a person via the use of the EEG waves. Additionally, the EEG waves can be used to create a dust-like, ultra-vibrating material that reproduces the secrets of Ittou's Iado attack techniques. Though, the cockpit is still a conventional one.

Only two Striker Customs ever existed, one of which belonged to Barghest, while the other belonged to True Federal, and was destroyed before Barghest could ever technically own it after the pilot turned traitor against True Federal.

On the cover of Vol. 1 of Mobile Suit Gundam: Katana

Data in Bonds of the Battlefield 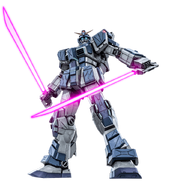 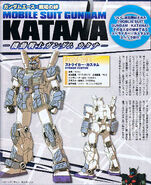