While the RGM-79 GM proved itself to be a highly capable MS, the introduction of Zeon's well-armed and agile MS-09B Dom on Earth saw the need for a more maneuverable and better-performing mobile suit. A variant of the GM, the RGM-79D GM Cold Districts Type had increased thruster power and maneuverability, and some were modified for harsh climate conditions, most notably cold weather combat. In addition, to ensure the survival of troops in cold climates where stormy weather often lasts for several days, it has exceptional communication capability for a ground mobile suit during the One Year War. The RGM-79D could be equipped with a variety of weaponry, including two types of 90mm machine guns (one of which is fitted with an underslung grenade launcher), head-mounted vulcans, and a beam saber.

The bullpup machine gun was a system weapon developed as a space/ground dual-use projectile weapon. Though compact, it has sufficient anti-MS firepower while maintaining accuracy. Its muzzle velocity is increased due to the use of new gunpowder and this enables it to easily penetrate the armor of Zeon's mobile suit. A box-like sensor system incorporating a video camera and laser sensor is installed at the top, and when this system is used alongside the GM's targeting system, target acquisition capability is enhanced.

The GMG-Type 2 was independently developed by Norfolk Industries as an MS-use electrically operated 90mm Machine Gun. The magazine projecting from the side on this weapon doubles as a foregrip, and an add-on grenade launcher can be equipped under the barrel, both of which are rare features for Federation weapons. A model adapted for use in arctic conditions also exist.

The RGM-79D GM Cold Districts Type was introduced late in the war, with at least three units assigned to Lieutenant Yuu Kajima's MS combat testing squad. Yuu's unit quickly proved the value of the GM Cold Districts Type, destroying several Zeon mobile suits in defense of a Federation Forces base, including several MSM-03C Hygoggs and three Doms. Other units were deployed to guard important Federation Forces bases, such as the Arctic base.

On December 9th, U.C. 0079, when the shuttle carrying RX-78NT-1 Gundam "Alex" was being prepared for launch, the Arctic base was attacked by the Cyclops Team, a Zeon special forces team. The Cyclops Team easily destroyed most of the GM Cold Districts Type defending the base, but one of them was able to shoot the Hygogg piloted by Cyclops Team member Andy Strauss in the cockpit while he was attempting to destroy the shuttle, killing him and allowing the shuttle to launch safely.

Being deployed (from Gundam 0080 OVA) 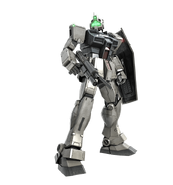