Based on the late production type of the RGM-79 GM, the GM Type C features improved generator output and incorporates several new technology, such as sensor and devices from the GM D type and G type. Its various components were all designed to maximize reliability, ease of production, ease of maintenance, and ease of modification. It was intended to achieve the goals originally set by Operation V.[1]

The beam saber is a small device held in the mobile suit's hands when deployed and is powered by a rechargeable energy capacitor. It emits high-energy Minovsky particles to form a blade-shaped I-field (via manipulation of electromagnetic fields), and then fills this I-field shell with superheated Minovsky particle plasma to produce an effective cutting blade. One beam saber is stored on the left side of the backpack. Units used by commanders are equipped with two, one on each side of the backpack.

A beam weapon originally used by the RGM-79[G] GM Sniper during the One Year War, it mounts a high-powered scope, allowing the pilot to hit distant targets with pinpoint accuracy. When equipped with this weapon, the GM Type C's head would be retrofitted with a movable goggle, similar to the one of the RGM-79SP GM Sniper II, that contains an additional sensor system; this goggle would cover the suit's head visor during sniping.

An enhanced version of the Federation’s successfully BR-M-79C-1, the C-3 has an output of 1.5 MW and was introduced late in the One Year War. This model was shorter than the C-1 and featured a new sensor system. This targeting system allows the weapon itself to acquire targets rather than relying exclusively on the GM’s head sensors like the C-1.

The standard ranged armament of many mobile suits is the beam rifle. The particle beam fired from a beam rifle can penetrate almost any armor that has not been treated with specific counter-measures. This is the same model as used by the GM II and Nemo, it has a power rating of 1.9 MW and is powered by a built-in energy CAP system.

The same firearm as used by the RX-78-2 Gundam, it is the first portable mega particle weapon to be used by a mobile suit. Realized through the use of energy CAP technology, it can destroy the Zaku II with one shot and sink a warship with several shots. Features include a large, movable offset sensor that interfaces with a mobile suit’s Fire Control System (FCS) to achieve a high degree of accuracy, and a stabilizing foregrip for firing support.

This weapon utilizes the system weapon construction of the HWF GMG·MG79 machine gun to create a dockable-type long barrel rifle. Though the long barrel would typically place this weapon in the sniper rifle category, when combined with the 120 round box magazine, the weapon can also be utilized as a squad support weapon.

A flail-type morning star with a long chain and anchor-shaped grip attached to a spiked iron ball. The weapon could either be thrown or swung around the mobile suit itself to damage enemy units.

An alternate shield used by the GM Kai deployed by AEUG, it is the same shield as used by the MSA-003 Nemo. It can switch between an expanded state and a collapsed state for ease of use, and like other shields, its surface has an anti-beam coating to defend against beam attacks. Other features of the shield include sharp edges at the top for ramming/striking attacks and latches on the back for mounting other weapons or equipment.

Equipped on both shoulders. They consists of lights for working in the dark and external sensors that can also transfer collected data to companion MS.

The GM Type C entered mass production near the end of the One Year War.[2] It was designed to be the reference template for the GM series, since the design and specification of GM variants produced during the war were heavily inconsistent.[1] The earliest prototypes were tested around October U.C. 0079, before receiving the designation of RGM-79C in early December.[3]

During the Battle of A Baoa Qu on December 31st, a large number of RGM-79C (then named "GM Late Type") participated in the attack on A Baoa Qu's E Field.[4] Following the end of the war, production of the GM Type C continued as part of the Federation Forces Reconstruction Plan, a plan to replace destroyed weapons and update obsolete ones at each Federation stronghold. In April, U.C. 0081, around ten units were assigned to Torrington Base, several of which were modified to become testbed units.[1]

Despite a large production number, the GM Type C never entered combat as a true main force mobile suit. This was due to its lackluster performance during the Delaz Conflict in U.C. 0083, during which it failed to combat the outdated mobile suits employed by the Delaz Fleet. It should be noted, however, that most of these units were caught off guard by Delaz Fleet's surprise attacks. During the attack on Torrington Base, for example, many units were destroyed before having a chance to fight back.[1]

Regardless, it served as the reference for Federation mobile suits in the 80s onward, and made great contribution to the establishment of development know-how. Various GM Type C-based testbed units and data collection units, such as the RGM-79 Powered GM, became the foundation for future Federation mobile suits.[1]

Several GM Type Cs also appeared in the seventh and eighth chapters of the Anaheim Laboratory Log series. These machines were owned by Anaheim Electronics for non-combat use and were painted in AEUG colors. Some were also modified to be commander units and they have legs with spare propellant tanks and thrusters attached, similar to those of the RGC-83 GM Cannon II's. Anaheim used its GM Type Cs in support roles during operational tests of the FXA-08R-X1 Proto Mega Rider.

Destroyed by the Physalis 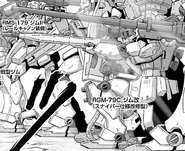 GM Type C modified for sniping (from Gundam EXA VS) 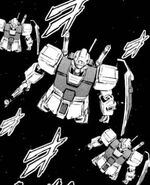 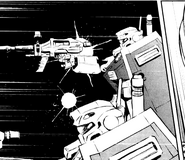 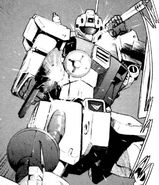 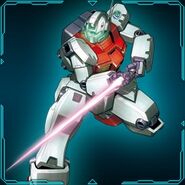 Shadows colors as featured in Bonds of Battlefield arcade game 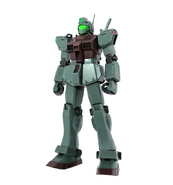