The RGM-79C[G] GM Ground Type-C is a ground combat variant of the GM Type-C produced by the Earth Federation Forces. It was upgraded with dustproof treatment that focused on the joints, modification to the soles and the equipping of a larger backpack. Some of these changes can also be seen in other GM type mobile suits that were upgraded for ground combat, making it evident that compatibility was maintained. The units on the assault carrier Spartan are equipped with assault rifles for mid-range interception, while the units deployed on the landing craft over the sea were equipped with long range beam rifles and missile launchers for long-range attacks. The manga version has a different color scheme from the OVA version.

A close combat weapon that emits a blade-shaped beam from the hilt when drawn. The GM Ground Type-C's beam saber is stored horizontally on the bottom of the normal backpack which is concealed by the large backpack.

A bullpup style firearm, it is equipped with a grenade launcher underneath its barrel. It is the same weapon as used by the RX-78AL Atlas Gundam.

A large beam rifle with a longer effective range than normal beam rifles.

A handheld multi-tube missile launcher can be used for long-range attacks.

A piece of equipment that increases the GM Ground Type-C's defensive capability, it is mounted on the left forearm and/or handheld.

In August UC 0080, the assault carrier Spartan came under attack on Earth from mobile suits belonging to the breakaway South Seas Alliance. Due to the extensive repairs needed on the RX-78AL Atlas Gundam, Io Fleming used a GM Ground Type-C to assist in the Spartan’s defense.

Preparing to launch with Corvette Booster 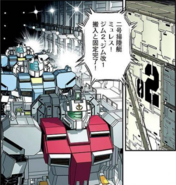 GM Ground Type-C and GM (Thunderbolt Ver.) in the manga