Since the Earth Federation was far behind in Newtype research and had little understanding of psycommu system technology, they had to figure out by themselves how the system works, initially with technologies they were utterly familiar with. The RB-79 Ball is remodeled into an attack pod that is mounted on both shoulders, and the cockpit is diverted from the TGM-79 GM Trainer to make it a double seater, so that the gunner can manually control the attack units. In addition, RX-78NT-1's Chobam Armor, which was being developed at that time, was diverted to improve the armor's defenses to deal with the gaps during manual control.

There are two (four in total) beam rifles installed on the two balls mounted on both shoulders. In combat, the gunner of the GM Juggler manually controls these units with laser communication, performing a makeshift imitation of all-range attacks.

It turned out to be fraught with difficulties even just to imitate the psycommu system- the manually-controlled all-range attack never performed satisfactorily- and the added bulk of the remote attack units contributed to the excessive topweight and consequently poor mechanical balance of the GM Juggler. Repeated improvements were made in an effort to overcome these flaws, and this difficult development process continues until the end of the One Year War without producing a viable overall result. With the latest psycommu technology falling into Federation hands by the end of the war, the GM Juggler was no longer needed, leading to an end of its development. 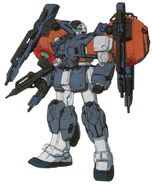 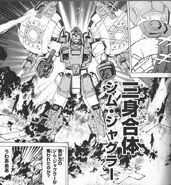