The RGM-79/GH Gundam Head is a mobile suit from the Mobile Suit Gundam Thunderbolt series.

The RGM-79/GH Gundam Head is a variant of the standard mass production RGM-79 GM of the Federation Forces. The primary difference is in the form of its namesake: a Gundam-type head, which is meant to replicate the psychological impact that the famous Gundam had on the Zeon forces. The Gundam Head’s joints have been sealed for protection from space debris. The new head unit has additional sensors compared to a regular GM, and its large backpack features two sub-arms that can hold two shields.

A central block located in the torso, it houses the mobile suit's cockpit, control systems and main power source. The core block can be ejected in case of emergency and transforms into an emergency pod. 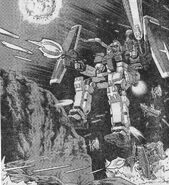 Retrieved from "https://gundam.fandom.com/wiki/RGM-79/GH_Gundam_Head?oldid=423908"
Community content is available under CC-BY-SA unless otherwise noted.