The RGM-79[G] GM Sniper is a variant of the RGM-79［G］ GM Ground Type. It is first featured in the anime series Mobile Suit Gundam: The 08th MS Team.

The GM Sniper has improved sensor accuracy and an added operating system for using the long-range beam rifle. The mobile suit's cooling equipment and power transmission system are also tuned with usage of the long-range beam rifle in mind. Besides these changes and the different color scheme, the GM Sniper's basic performance is the same as that of the GM Ground Type.

The GM Sniper uses a long-range beam rifle mounted with a high-powered scope, allowing the pilot to hit distant targets with pinpoint accuracy. The rifle can be powered via one of two ways; either the GM Sniper charges the rifle's E-Cap for more then two minutes and it can only fire two shots per charge, or the E-Cap is bypassed and the rifle is connected via cable to an external power supply and cooling system. This second method has higher output, range and longer beam irradiation time, allowing the weapon to destroy a space cruiser in a single shot.

The GM Sniper has two beam sabers, one stored in the side of each leg. The beam saber is a small device held in the mobile suit's hands when operated and is powered by a rechargeable energy capacitor. The beam saber emits a blade of plasma contained by an I-Field and can cut through most armor not treated with anti-beam coating.

At least three RGM-79［G］ GM Ground Types of the Kojima Battalion were outfitted as GM Snipers and were instrumental in the destruction of the Principality of Zeon's experimental mobile armor Apsalus III and Shiro Amada's RX-79［G］Ez-8 Gundam Ez8 during the One Year War. 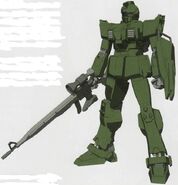 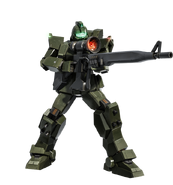 Retrieved from "https://gundam.fandom.com/wiki/RGM-79%EF%BC%BBG%EF%BC%BD_GM_Sniper?oldid=460339"
Community content is available under CC-BY-SA unless otherwise noted.