The RGM-79[G] GM Ground Type is a ground based predecessor to the RGM-79 GM. It first appeared in Mobile Suit Gundam: The 08th MS Team.

An early prototype of the Earth Federation Forces' mobile suit mass production project, the GM Ground Type was developed before the RX-78-2 Gundam's operational data was recovered. Even though it was only able to operate on Earth, its internal parts were all tuned for ground combat, and it was equipped with Luna Titanium armor, causing its mobility, maneuverability, and general performance to surpass the later RGM-79 GM.[1][2] It is said that its performance under gravity even rivals that of the RX-78.[2]

The GM Ground Type was a simplified version of the RX-79［G］ Gundam Ground Type, and produced using the same production line.[3][4] Compared to the Gundam Ground Type, the GM Ground Type omitted the chest-mounted Vulcan gun and multi-launcher, the weapon container mount on the backpack, and was equipped with a less powerful generator.[3][4] It also did not incorporate parts from the RX-78 series, though its head unit was similar in specs to that of the RX-78's.[2] Since it was produced after the production format was established, its ease of production, ease of maintenance and availability of parts were all greater than its predecessor.[3]

Due to its use of Luna Titanium alloy, it was unsuited for mass production and produced in limited numbers. However, the GM Ground Type was important in establishing the EFF's mobile suit production framework. The operational data it collected contributed to the development of later mobile suits.[4] Finally, the basic structure of its head was later inherited by the RGM-79 GM, becoming the iconic face of Federation mass production mobile suits.[2]

The GM Ground Type has two beam sabers, one stored in the outer side of each leg. The beam saber is a small device held in the mobile suit's hands when operated and is powered by a rechargeable energy capacitor. It emits a blade of plasma contained by an I-Field and can cut through most armor not treated with anti-beam coating.

The standard armament for Federation's mobile suit ground forces during the One Year War that was developed by Yashima Heavy Industries. It has an alternate model number: "NF·GMG-Type.37/100mm". Equipped with a box magazine and folding stock, it has excellent rate of fire and is easy to wield. It utilized a smoothbore type barrel that lacked rifling and has to be replaced after firing 3000 rounds. The weapon could utilize three different types of ammunitions: HEAT (High Explosive Anti-Tank), APFSDS (Armor-Piercing Fin-Stabilized Discarding-Sabot), and HESH (High Explosive Squash Head), allowing combat units to select the appropriate type to meet operational needs. The GM Ground Type can carry two spare magazines on its side skirt armor.

A transportable cannon developed by Yashima Heavy Industries as a long-range weapon for use in 1G environment. It has an alternate model number: "NFHI·GMCa-type.09/". Its design is thought to have referenced the Zimmad Corporation’s ZIM/M-T-K175C Magella Top Cannon. It uses a six-rounds box magazine that is inserted into the top. The most notable feature of this weapon is that it can be broken down into compact components for transport in containers carried by the mobile suit.

The same handheld firearm used by the MS-06 Zaku II. It was mainly used for long distance ground combat and can be loaded with high-explosive anti-tank (HEAT) or armor-piercing fin-stabilized discarding-sabot (APFSDS) rounds. Used by Marvin Herriot's unit during an assassination mission.

Mounted on the forearm, this small, light shield is commonly used by the Gundam Ground Type and GM Ground Type. Constructed of Luna Titanium alloy, it is designed to primarily protect the cockpit and other critical areas, and as such has a different form than the RGM-M-Sh-003 model. Additionally, it can be used as a close-range striking weapon in mobile suit combat. Furthermore, through lodging the spikes at the tip into the ground, the shield can serve as a free-standing frontal defense. This also allows the mobile suit to use both hands to hold large caliber weaponry and maintain a stable firing position.

Container for storing spare or additional armament that can be attached to the container rack. The container allows the GM Ground Type to carry a variety of armaments and ammunition for both itself and the other members of its squad.

In order to prevent the expansion of Zeon's power, the GM Ground Type was quickly deployed in strategically important Southeast Asia. It was also deployed on a priority basis to special forces for the purpose of collecting data on actual battles with MS. Toward the end of the war, it was also deployed in Operation Odessa, which became the stage for a large-scale battle on the ground. 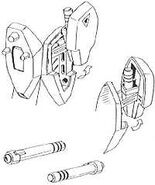 In action along with M353A4 Bloodhound command vehicle (The Gravity Front)

Being struck by Zeon's Zaku Tank (from Zeon MS Boys: The War of Independence) 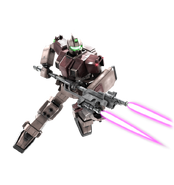 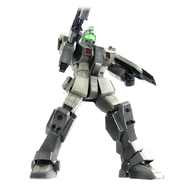 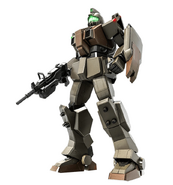 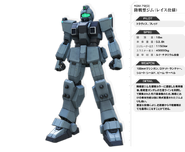