The RGM-237C Powered GM Cardigan is a Gunpla from Gundam Build Fighters Try. It is piloted by Fumina Hoshino.

Based on the RGM-79 Powered GM from Mobile Suit Gundam 0083: Stardust Memory, the Powered GM Cardigan's combat capability is greatly enhanced compared to its predecessor. Besides retaining the head vulcans and beam sabers, the Powered GM Cardigan is also equipped with two large rifles, two shields, two Gatling guns and a handheld beam machine gun. Due to the variety of weapons, the suit has no problem engaging enemy units in any combat range. Although the Powered GM Cardigan is heavier due to the numerous add-ons, the negative effects they have on the suit's mobility are kept to a minimum thanks to extra thrusters on the legs as well as on the backpack.

Mounted on the head, the pair of shell firing weapons have a high-rate of fire but little power. They can however damage lightly armored areas such as the sensors and are ideal for intercepting incoming missiles or enemy units at close range.

A sword-like beam weapon that serves as the Powered GM Cardigan's primary close combat weapon, a pair of them are stored in the storage racks on top of the shoulder armor. The racks will rotate forward when the beam sabers are needed.

Mounted on each arm, the triple-barrel Gatling guns have low accuracy, but they can cause heavy damage when fired in close range. When in use, the top section of the yellow add-ons on the arms will pop up to reveal the Gatling guns.

Mounted on the backpack via short movable arms, the pair of large rifles are mainly used for long range combat and have high attack power as well as high accuracy. The large rifles can flip down when in use and can be ejected if damaged.

Powered GM Cardigan's primary mid-range weapon, it is a beam rifle that can fire beam shots individually or in three-round bursts.

The fingers of the Powered GM Cardigan are fitted with dummy launchers that launch dummy balloons that roughly resemble the suit. The dummy balloons are used for tricking enemy units during combat. 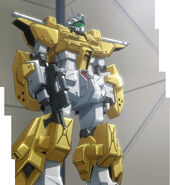 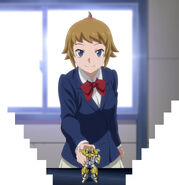