Developed by Anaheim Electronics, the Javelin was based on the frame of the RGM-119 Jamesgun and the early model, and share most of its parts and system designs with the Jamesgun. The later production model, which was the one used during the Zanscare War, was built with completely original parts. In addition to various thrusters that improve its mobility over the Jamesgun in space, the Javelin was also equipped with a backpack fitted with a pair of shot lancers, inspired by similar weapons of the same name used by the Crossbone Vanguard's mobile suit. The shot lancers can be replaced by other weapons depending on the situation, resulting in variants such as the RGM-122 Javelin Mega Spear Loading Type and the RGM-122C Javelin Cannon. Although the Javelin is the best mass production MS available to the Earth Federation, it is still several decades old by the time of the Zanscare Wars, and was outclassed by late Zanscare war designs.

The backpack mounted shot lancer is a weapon originating from the Crossbone Vanguard that became standard equipment on the Javelin. It is a close to mid-range weapon designed to impale enemy mobile suits by using an electromagnetic launching equipment to propel the rotating lances at high speeds.

Unlike an I-field generator, which is effective only against beam attacks, the beam shield blocks both beam and projectile weapons. The beam shield generates a plane of energy similar to the blade of a beam saber. This plane is divided into multiple sections, which can be turned on or off as needed to conserve energy. Individual sections are also automatically deactivated whenever they're in danger of coming into contact with the mobile suit itself. A beam shield is mounted on the Javelin's left arm.

The beam saber emits high-energy Minovsky particles to form a blade-shaped I-field (via manipulation of electromagnetic fields), and then fills this I-field shell with superheated Minovsky particle plasma to produce an effective cutting blade. The Javelin is equipped with a pair of standard beam sabers for close range combat.

The Javelin uses a standard beam rifle for ranged combat that is powered by rechargeable energy cap.

The RGM-122 Javelin was deployed by the Earth Federation during the first half of the second Universal Century as the replacement for the older RGM-119 Jamesgun. Their exact roll out date is unknown, but they were seen as early as U.C. 0133, fighting alongside Jamesguns and limited production F91 Gundam F91 against the forces of the Jupiter Empire. During the battle, Javelins destroyed more Empire mobile suits than Empire suits did Javelins, though it is unknown if it was because of a technological difference between the machines or a skill difference between the pilots. The Javelin would then acquit itself very well against the Empire during the counterattack with the Crossbone Vanguard and the Colonial Earth Federation Forces.

Three years later in U.C. 0136, the Javelins were deployed as part of an Earth Federation mobile suit team sent to investigate reports of mysterious attacks in an uninhabited region of outer space. The Javelins were then defeated by the MS-06MS Barbus, which used older technology but were piloted by (Newtype) chimpanzees.

The Javelin was still in use during the U.C. 0150s when the Zanscare Empire declared war on the Earth Federation, but by U.C. 0153, it was clear that the 30 year old mobile suit was lacking. While it was able to fight evenly with early Zanscare models such as the ZM-S06S Zoloat, some Earth Federation units replaced it with the newer LM111E03 Gunblaster provided by the League Militaire to better fight newer Zanscare models. In the novel version of events, the Javelin was phased out in favor of the RGM-147. 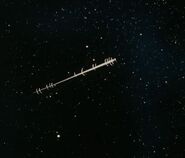 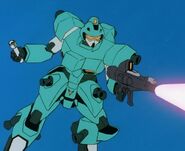 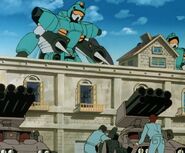 As seen in Gundam Build Divers 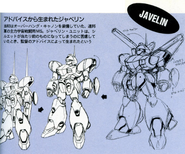 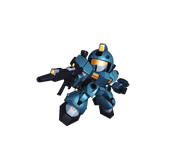