The RGM-111 Hardygun is a mobile suit developed by Anaheim Electronics as part of its "Silhouette Formula Project". It appears in the manga series Mobile Suit Gundam F91 Silhouette Formula.

To catch up with SNRI in the field of miniature MS development, Anaheim Electronics started the Silhouette Formula Project. This project used stolen data of the SNRI’s Formula Project to create a new series of MS. One of the machines developed was the RGM-111 Hardygun, which was systemically positioned between the older RGM-109 Heavygun, and the F71 G-Cannon, which was developed around the same time.

The Hardygun is actually a heavily modified F70 Cannon Gundam, and like the F90 Gundam F90, has multiple hardpoints installed on its body, giving it high expandability. While the F71 G-Cannon was designed with suppressing rebellions and the likes as its main mission, the Hardygun was developed for anti-mobile suit combat. As a result, it has higher combat performance than the normal G-Cannon. Furthermore, due to the use of SNRI’s technology, the Hardygun also has a generator with higher output.

Mounted in the head, these shell firing weapons have a high-rate of fire but little power and can't damage the thick armor of a mobile suit, though they can damage lightly armored areas such as the sensors. They are ideal for shooting down small, lightly armored targets such as missiles, attack vehicles, etc.

Mounted on top of the chest, the pair of mega machine cannons are shell firing weapons with stronger firepower than the vulcan guns.

A rack carrying three grenades is mounted on each side of the waist.

The standard close range armament for most mobile suits, it is a small cylindrical device held in the mobile suit's hands when operated and is powered by a rechargeable energy capacitor. The beam saber emits a blade of plasma contained by an I-Field and is capable of cutting through any metal not treated with anti-beam coating. The Hardygun is equipped with a beam saber stored on the left side of its backpack.

A twin barreled beam gun is mounted on each forearm.

Mounted on the right side of the backpack, this large caliber beam launcher can be rotated to be stored behind the waist when not in use. The beam launcher utilizes similar technology as the beam rifle, but is more powerful and is powered directly by the mobile suit's reactor.

A standard hand carried ranged beam weapon is the beam rifle. Capable of firing concentrated mega particles, attacks from a beam rifle are can damage any ordinary armor that has not been specially treated to resist it. The Hardygun can use the same beam rifle as the Heavygun.

A basic arm-mounted defense armament for many Federation mobile suits. The shield is a thick sheet of armor designed to take severe punishment that would normally destroy a mobile suit, and is also treated with an anti-beam coating to withstand several beam shots before the coating wears off. Typically, physical shields can only take so much damage before they succumb to the pressure and break. The Hardygun uses a custom shield.

Around the time that Anaheim Electronics became the manufacturer of the F71 G-Cannon, the company also started the Silhouette Formula Project to catch up with SNRI in the field of miniature MS development. One of the mobile suits developed under this project was the RGM-111 Hardygun. Though the Hardygun was a formidable mobile suit, Anaheim Electronics never intended to put its design into mass-production because they never expected to sell any of their Silhouette Formula Project mobile suits to the Earth Federation Forces. 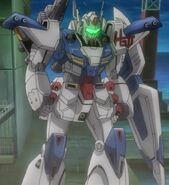 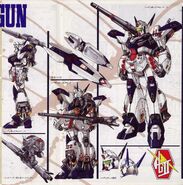