A variant of the RGM-109 Heavygun, its design remedies the Heavygun's relatively lack of weaponry. It is fitted with numerous weapons for mid-range support purposes, and they can be purged during close combat. Due to the base Heavygun's low generator output, the suit could not use too many beam weapons simultaneously. Additionally, equipping all the weapons at once resulted in decreased mobility due to the added weight, thus, the suit would usually deploy with only the required weapons after carefully consideration.

These shell firing weapons have high-rate of fire but little power, and can't damage the thick armor of a mobile suit, though they can damage lightly armored areas such as the sensors. They are ideal for shooting down small, lightly armored targets such as missiles, attack vehicles, etc.

The beam saber emits high-energy Minovsky particles to form a blade-shaped I-field (via manipulation of electromagnetic fields), and then fills this I-field shell with superheated Minovsky particle plasma to produce an effective cutting blade. The Heavygun usually stores a beam saber in its body for melee combat.

Although the number of shots is limited, its firepower is still capable of sinking a battleship in one shot if the conditions are right. This handheld weapon is stored on the rear skirt armor when not in use.

Equipped on the left arm.

Equipped on the right arm. 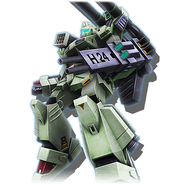 Retrieved from "https://gundam.fandom.com/wiki/RGM-109_Heavygun_Full_Equipment_Type?oldid=441537"
Community content is available under CC-BY-SA unless otherwise noted.