A standard armament of the mobile suits descended from the Earth Federation Forces's RX series is a pair of head-mounted 60mm vulcan guns. These shell firing weapons have a high rate of fire but little power, and can't damage the thick armor of a mobile suit, though they can damage lightly armored areas such as the sensors. They are ideal for shooting down small, lightly armored targets such as missiles, attack vehicles, etc. 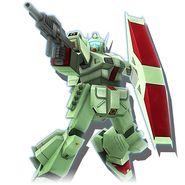 Retrieved from "https://gundam.fandom.com/wiki/RGM-109_Heavygun?oldid=433141"
Community content is available under CC-BY-SA unless otherwise noted.