The RGM-109M-5 Heavygun is a variant of the RGM-109 Heavygun that appears in Mobile Suit Victory Gundam.

The RGM-109M-5 Heavygun is a modified version of Earth Federation's RGM-109 Heavygun. It has a slight reduction in height and weight, and is equipped with a more powerful reactor. It also had a reduced number of vernier thrusters, but the same number of rocket thrusters that have been upgraded to provide higher thrust. Despite being newer, though still outdated compared to modern mobile suits of the time, the RGM-109M-5 Heavygun has a reduced set of armaments due to the removal of the grenade racks and head vulcans.

The same portable firearm as used by the original RGM-109 Heavygun, it features a full barrel structure for barrel protection and to maintain accuracy. As the weapon is developed during a time where anti-MS combat is not the main focus and usage of beam rifles are actively avoided to protect the space colonies, it is installed with a sub-sensor as well as a limiter to avoid excessive power.

For several decades of the late Universal Century, the Earth Federation allowed the colonies to maintain their own private defense forces, likely as a means of relieving tension between the Earth-based government and those living in space. However, most of the mobile suits that served in these colonial defense forces were older models that the Earth Federation no longer used. For its own defense, the Macedonia colony used the RGM-109M-5 Heavygun. However, when the Zanscare Empire began its militarist expansion in UC 153, it became known that the RGM-109M-5 Heavygun was painfully outdated and outperformed by the Zanscare Empire's mobile suits that were superior to even the Earth Federation Force's. Still the Macedonia colony attempted to resist with their mobile suit forces but it proved futile. 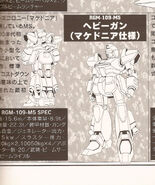 Retrieved from "https://gundam.fandom.com/wiki/RGM-109M-5_Heavygun?oldid=433139"
Community content is available under CC-BY-SA unless otherwise noted.