A new generation production mobile suit developed from the AGE-1 Gundam AGE-1 Normal.[2] The unit's development took about 25 years long to develop due to deciphering the black box of the AGE system.[3] As it utilizes a frame that is developed from that of the AGE-1, the weapons can be shared.[1] It also carries on the AGE-1's ability to switch into wears of Titus and Spallow according to the combat situation.[1] It is pretty much said to be a mass-produced Gundam, leaving remarkable combat records on many battlefields.[1] The Adele is equipped with the several basic weaponry such as DODS rifle, two beam sabers, and a shield. The Adele is also used as a basis for the AGE-1 Gundam AGE-1 Daiki Version.

The basic long ranged armament that is newly designed for the Adele. The DODS rifle maintains the same strength as that of the Gundam AGE-1,[1] and due to the enhancement in its sensors, it omits the precision firing mode, hence increasing cost performance.[1]

The Adele's basic defensive armament. It is a fairly standard shield usually mounted on the left forearm.

Like the AGE-1 Gundam AGE-1 Normal, the Adele's arms and legs are detachable, which allows alternate sets of limbs, or "wears" to be attached in the field. Examples include the Titus Wear Configuration and Spallow Wear Configuration.

The Adele can be equipped with the WMS-GB5 G-Bouncer's boosters. This equipment overall increases the Adele's speed.

Based on the data of the AGE-1 Gundam AGE-1 Normal, the Adele is a mass production version of the AGE-1. The Adele debuted in A.G. 140 during an attack on the colony of Tordia.

In A.G. 140, the Adele started to replace the older RGE-C350 Shaldoll Custom and RGE-B890 Genoace II units as the Earth Federation's main unit. It is deployed throughout the battles with the Vagan. Two notable Adele units, painted in a unique blue scheme, were piloted by Alisa Gunhale and Max Hartway. 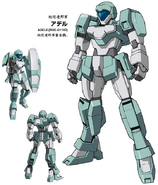 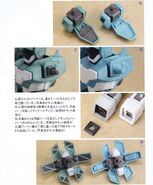 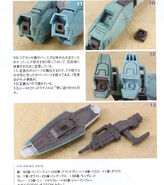