The Shaldoll was originally a base model intended for customization based on client preferences.[1] There were some appealing samples out of the many variations available.[1] During the war against the Vagans, it is formally adopted by the Federation as it fights alongside Genoace ll and Adele, being a popular machine amongst civilians whom are temporarily registered as pilots.[1] The Shaldoll Custom has extra thrusters giving it more mobility and a larger sensor than the regular Shaldoll. It is equipped with the several basic weaponry such as a DODS Gun, two beam vulcans, and a shield. Despite having improved capabilities over the previous models of Shaldoll and Genoace, the Shaldoll Custom appears to be outmatched by the ovm-e Dorado.

Mounted on the sides of the suit's head, the pair of beam vulcans are used to intercept incoming missiles and enemy units at close range.

Stored on the backpack, it is a simple beam saber that allows the mobile suit to engage in close combat.

A mass produced version of the AGE-1 Gundam AGE-1 Normal's DODS Rifle. It is not as powerful as the DODS Rifle, but can still take down UE mobile suits in one shot. However, the DODS Gun are less effective against Vagan mobile suits with Electromagnetic Armor, such as the ovm-e Dorado.

The Mega Launcher is the optional long ranged armament of Shaldoll Custom. It fires powerful beams that can penetrate the armor of the Vagan Battleship.

The Shaldoll Custom was developed sometime after the Battle of Ambat in the year A.G. 115. Though the exact date of introduction is unknown. The Shalldol Custom alongside The Genoace II and Genoace also took part in protecting the Toludin Base during A.G 123 from Vagan attacks.

The Shaldoll Custom is still in service in the year A.G. 140 and is used by the Earth Federation as one of their main mobile suits, although in A.G. 140 it is being phased out for the newer and more advanced RGE-G1100 Adele. The Shaldoll however is proved to be inefficient in dealing with the more advanced ovm-e Dorado.

Even in A.G. 164, the Shaldoll Custom is still deployed by the Federation despite being outdated. Many of these units are seen to be deployed in the battle for Rostroulan and La Gramis. 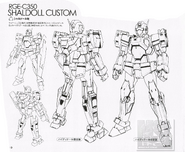 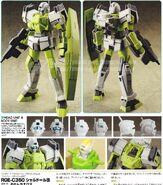