The Genoace II is a new mobile suit that is the successor to the RGE-B790 Genoace and was modeled after Woolf Enneacle's modified Genoace, the RGE-B790CW Genoace Custom.[2] The machine is adjusted for improved maneuverability and has somewhat sensitive controls, making the Genoace II easy to handle by regular pilots.[3] While possessing similar performance capabilities to the Genoace Custom, its combat abilities are further improved by the addition of a beam saber and a mass-produced DODS gun. Even upon the advent of the relatively higher performance Adele, the Genoace II is still being used by many pilots since the Genoace itself has molded the skills of many pilots.[3] Its enhanced thrusters and sensors are identical to that of the Genoace Custom.[3]

A mass produced beam weapon modeled after the AGE-1 Gundam AGE-1 Normal's DODS Rifle. Although not as powerful as the DODS Rifle, it still has enough power to take down most Vagan mobile suits in one shot. However, the DODS Gun is less effective against more advanced Vagan mobile suits with Electromagnetic Armor, such as the Ovm-e Dorado.

The Genoace II's basic defensive armament. It is a fairly standard shield usually mounted on the left forearm.

An axe-shaped close combat weapon used to cut through the armor of enemy mobile suits.

The Genoace II was developed in the year A.G. 115 shortly after the Battle of Ambat. It would serve as one of the Earth Federation's main mobile suits for 25 years before it began to be phased out by the newer RGE-G1100 Adele in A.G. 140. Despite being replaced as the Federation's main mass production mobile suit, many Genoace II units was still deployed by the Federation. One such unit, painted in a unique blue is piloted by Obright Lorain in A.G. 140.

In A.G. 140, one unit was seen battling the ovm-e Dorado mobile suits that attacked Tordia. Though it was mostly disabled without inflicting any damage, that particular Genoace II proved crucial by holding one of the Dorados long enough for Asemu in the Gundam AGE-1 to finish it. The Genoace II would be proved to be inefficient in dealing with the more advanced Dorado in the battles to come.

Another surviving unit is seen in A.G. 151, during the Earth Federation Forces's hunt for the renegade organization Bisidian, piloted by Largan Drace. It is used to engage against Wivik Lambro and his G-Xiphos.

Even in A.G. 164, the outdated Genoace II is still deployed by the Earth Federation. 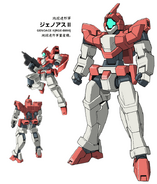