The Genoace Fox Custom is a custom mobile suit ordered by MS racer Fox from the Madorna Workshop.[1] Due to Fox's preference for excessive heavy armor and weaponry, its silhouette hardly resembles the original machine.[1] Although it has a heavy frame, it has hover units (another preference of Fox) built into the legs for high-mobility movement on the ground.[1] It is armed with large Beam Cannons, called 'Fox Beam', on both shoulders, Beam Guns on both hips, and Rocket Launchers at the top of both shoulders.[1]

A weapon usually used by security MS, its firepower has been upgraded to deal with the Vagan threat. Two of these are mounted on the hips.

A special beam cannon created specifically for use by Fox, two of these are mounted on the shoulder hardpoints. The cannons can be swapped out for other equipment if needed.

Mounted on the top of each shoulder, the rocket launchers can be fitted onto other MS by changing their attachment point.

The Genoace Fox Custom was only seen in the Madorna Workshop during the events of the First Generation. 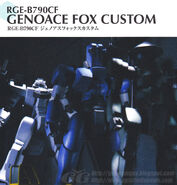 EXA Log - Background Info
Add a photo to this gallery

Retrieved from "https://gundam.fandom.com/wiki/RGE-B790CF_Genoace_Fox_Custom?oldid=431311"
Community content is available under CC-BY-SA unless otherwise noted.