After the end of the One Year War, the GM Cannon II was developed as the culmination of MS for support based on the data from the RGC-80 GM Cannon and RX-77D Guncannon Mass Production Type. Most of the production lines are shared with RGM-79N GM Custom, and the power reactor and basic frame have almost the same structure. For precision shooting under gravity, the stabilized gear on the waist is deployed to stabilize the machine. The exterior uses the concept of the full armor system of the RX-78NT-1 Gundam "Alex", and uses heavy composite armor similar to Chobam armor. However, the GM Cannon II pays the price for its powerful weaponry and enhanced durability with low speed and mobility.

The standard close combat weapon for Earth Federation mobile suits, it is a small device held in the mobile suit's hands when operated and is powered by a rechargeable energy capacitor. The beam saber emits a blade of plasma contained by an I-field and can through any armor not treated with an anti-beam coating. The GM Cannon II has a beam saber with a short-type grip stored on its left forearm.

A long-range beam weapon originally used by the RGM-79SC GM Sniper Custom, it shares some parts with RMS-179 GM II's BOWA·BR-S-85-C2 Beam Rifle and is powered by a rechargeable e-cap. The rifle's long barrel has a newly developed beam accelerator, enhancing the beam convergence rate by 40%.

Although it isn't known how many GM Cannon IIs were produced, it is known that two units were stationed on the Albion and used during Operation Stardust in UC 0083. The GM Cannon II was later deployed by the AEUG during the Gryps Conflict in UC 0087. Their units were painted forest green on gray with an orange visor. 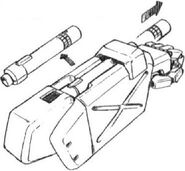 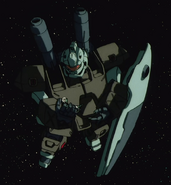 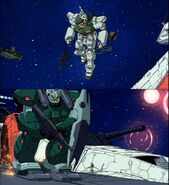 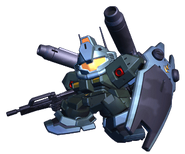 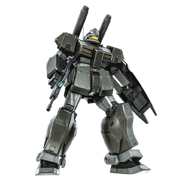 Retrieved from "https://gundam.fandom.com/wiki/RGC-83_GM_Cannon_II?oldid=460370"
Community content is available under CC-BY-SA unless otherwise noted.