Originally, it was planned for the RX-77-2 Guncannon to be mass-produced with a few tweaks to its design, but in consideration of the wartime situation, the design was changed to make use of the existing production line of the RGM-79 GM. Following a series of trial and error, the GM Cannon was created as a simplified mass production model of the Guncannon. A medium-range support mobile suit, the GM Cannon shares 60% of its parts with the GM, and has a high initial velocity cannon of the same caliber as the Guncannon's attached to its notched right shoulder. Its legs are fitted with removable left and right split type increased armor to maintain the mobile suit's balance when firing the cannon during ground combat.

Mounted over the right shoulder, this artillery cannon is for mid-range fire support. Two spare magazines can be mounted on the rear waist armor.

A handheld mega-particle gun with a lower focusing rate than a beam rifle and short-range. The beam spray gun features three different firing modes: a basic single-shot mode, a burst shot mode for area suppression, and a range shot mode that scatters the beam to cause damage over a wide area. Output 1.4 MW.

The same weapon as used by RMS-179 GM II, it has a power rating of 1.9 MW and is powered by a built-in energy CAP system. This beam rifle was used by the GM Cannons stationed in Jaburo during the Gryps War.

A basic defensive armament used by the Federation's GM type MS. It is composed of a triple honeycomb structure made of Luna Titanium. With the appearance of beam weaponry equipped Zeon mobile suits late in the One Year War, later models of this shield are treated with the recently developed beam coating. The shield can also serve as a weapon container as its back has specialized weapon latches for mounting various weaponry, allowing spare beam sabers and beam spray guns to be carried. Some pilots such as Lydo Wolf, would equip two shields, one for each arm. 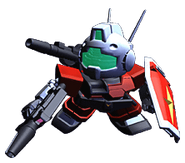 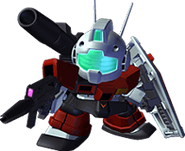 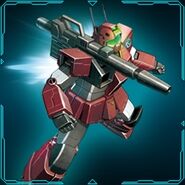 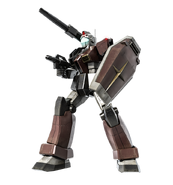 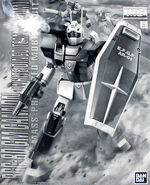 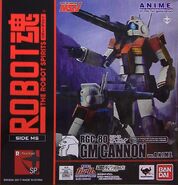 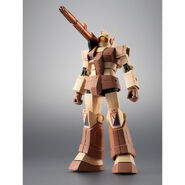 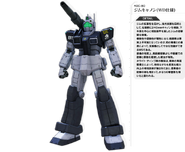