Although the RCX-76-02 Guncannon First Type was defeated by Principality of Zeon's mobile suits in the Battle of Mare Smythii,[1] cannon-type mobile suits were found useful as a intermediate-range support and development continued after the battle.[2][3] The GM Cannon was equipped with a 360mm rocket cannon and was deployed in the North American and the African fronts.[2][3] A portion of the GM Cannons were sent into space and were improved into the space assault type RGC-80S.[2][3] The split leg armor which had been mounted as a counterweight for the 360mm rocket cannon was removed, and the suit was fitted with the RGM-79SC GM Sniper Custom's leg sub-thrusters instead.[2][3] Units assigned to the 142nd MS Team, a mobile suit cover team for the Revil fleet, had a unique blue and white paint scheme, rather than the standard red and white.[2]

Developed as a new optional equipment for the GM series, this weapon was designed for space combat, and has a focus on increased production efficiency.[2]

According to records, the GM Cannon Space Assault Type participated in the attack on A Baoa Qu during Operation Star One.[2] 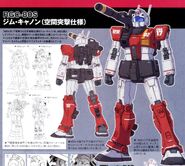