The RGC-80S GM Cannon Space Assault Type is a variant of the RGC-80 GM Cannon, and was first featured in the original design series MSV-R.

To make the RGC-80 GM Cannon more suitable for space combat, the Earth Federation developed the RGC-80S GM Cannon Space Assault Type. The GM Cannon Space Assault Type omitted the increased armor on the legs which was necessary for weight when the shoulder rocket cannon was fired on the ground, and it also has the same vernier thrusters as the RGM-79SC GM Sniper Custom on its backpack and legs, resulting in improved attitude control capabilities and mobility in space.

Mounted over the right shoulder, this artillery cannon is for mid-range fire support. Two spare magazines can be mounted on the rear waist armor.

A basic defensive armament used by the Federation's GM type MS. It is composed of a triple honeycomb structure made of Luna Titanium. With the appearance of beam weaponry equipped Zeon mobile suits late in the One Year War, later models of this shield are treated with the recently developed beam coating. The shield can also serve as a weapon container as its back has specialized weapon latches for mounting various weaponry, allowing spare beam sabers and beam spray guns to be carried. 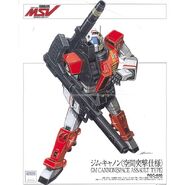 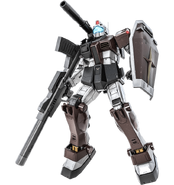