The RCX-76-02 Guncannon First Type (Iron Cavalry Squadron) (RCX-76-02 ガンキャノン 最初期型（鉄騎兵中隊）, RCX-76-02 Guncannon First Type (Iron Cavalry Squadron)?) is a mass-produced mobile suit featured in the Mobile Suit Gundam: The Origin manga, its OVA adaptation, the television recut and the Mobile Suit Discovery design series. It was developed from the RCX-76-01A Guncannon Mobility Test Type and RCX-76-01B Guncannon Firepower Test Type [1]. As a successor to the RTX-65 Guntank Early Type, it was categorized by the Earth Federation as a Main Battle Tank [2]. It was used by the Iron Cavalry Squadron, which functioned as a squadron made up of four teams, each consisting of three machines [3], thus 12 units were produced designated 101 to 112. 101 possessed a distinct color scheme, as it was piloted by the squadron's commander, Lieutenant Junior Grade Erdush [4].

Although developed from the Guntank Early type as a new type of MBT, it differed strongly in its functional concept. The Guntank Early Type placed little emphasis on mobility, and its main mission was long-range bombardment with its large-caliber cannons. Since the Guncannon First Type was intended for infantry-style operation, it had more versatile armament as well as better mobility [3].

Its specifications were decided based on evaluation tests using the RCX-76-01A Guncannon Mobility Test Type and RCX-76-01B Guncannon Firepower Test Type [5]. In addition to the long-range bombardment capabilities of the Guntank Early Type, it also emphasized bombardment from medium range, and it was designed so that its equipment could be changed depending on the mission and the team organization [3]. The Guncannon First Type had an armament platform on its shoulders, and was equipped with medium to long-range firearms. Its three-fingered manipulators carried a rifle and shield, but were not outfitted with close combat weapons that would have maximized its humanoid features [6].

The specifications thus lacked balance compared to Zeon's mobile suits, which were created with an emphasis on versatility. This was because the AE development team and the upper echelon of the Earth Federation Space Force. regarded the humanoid mobile weapon as an extension of large-scale combat vehicles. This was a "large mistake", as they later realized at the Battle of Mare Smythii [6].

The manipulators of the First Type did not envision close combat, so they were simplified to having three fingers [6].

Guns attached to both sides of the head that shot live rounds. They were frequently used not only in ground attacks but also in close combat in battles against other mobile suits as a means of containment [6].

A weapon for the mobile suit that shot live rounds. A metal fitting was attached to the breech to clasp the upper arm [6].

The Guncannon's main armament mounted on its left shoulder. The recoil from firing the cannon was lessened more than the large-diameter cannon of the RTX-65 Guntank Early Type [6].

A firearm for ground attacks that utilized live rounds. The Gatling gun and Low Recoil Cannon could be attached to either shoulder [6].

An armament attached to the shoulder that shot missiles. They were mounted on mobile suits VB111 and VB112 in the Iron Cavalry Squadron [6][4].

Protective gear for the mobile suit. A mount-latch for the upper arm and a grip for the manipulator to grasp was attached on its rear face [6].

Lieutenant Junior Grade Erdush's machine had been given distinctive markings to differentiate it from the standard type and make it easier to identify as a squadron commander's unit [2].

Anaheim Electronics, which had been keeping a close eye on the Autonomous Republic of Zeon's development of a new weapon, invited Dr. Tem Ray, a personal pupil of Dr. Minovsky to launch an in-house development of a humanoid mobile weapon. The RCX-76-02 Guncannon First Type was developed at AE's Von Braun plant, and was the first humanoid mobile weapon formally adopted by the Earth Federation Space Force [6].

Knowing that Zeon had mobile suits on the moon, a commander ordered the deployment of the entire Iron Cavalry Squadron which outnumbered the 4 Zeon suits they detected. Dr. Ray requested to come a long so he could see the Guncannons in action with his own two eyes [4]. A nerve-wrecking alarm pierced through the hangar of the Earth Federation's Pizarro-class Mobile Transport Ship as it rushed to the Mare Smythii on the surface of the moon. Soldiers in pilot suits dashed into the bellies of the moon-gray squadron Guncannon First Types in a well-trained manner. The hangar was jacked up, and a sharp glint lit up in the head visors [7].

The Pizarro-class deployed its twelve RCX-76-02 Guncannon First Types led by Erdush, with the objective to protect Dr. Minovsky's buggy. Confident of scoring the Squadron's first victory [7], Erdush's Guncannon and Guncannons VB102 through to VB107 fired their cannons at the MS-04 Bugu and the Black Tri-Stars. Unfortunately, the four targets leap out of the explosions undamaged. The Bugu dealt heavy damage to Erdush's Guncannon's chest with his main gun and then kicked it over. Gaia laughed as he destroyed Guncannon VB107. Mash then destroyed Guncannon VB105 with only a single shot from his Zaku I's Bazooka and then Ortega destroyed Guncannon VB106. Captain Ral commended the Black Tri-Stars for showing the "Federation Scumbags" what "real mobile suits" could do but failed to notice the buggy approaching Guncannons VB111 and VB112. He fired shots from his machine gun at the buggy while the two Guncannons returned fire from their Missile Launchers [4].

Seeing the destroyed Guncannons, Dr. Ray was in awe at how far Zeonic have advanced. The captain of the Pizarro-class mobile transport ship ordered a recall of the Guncannons but lost his voice when a red shadow loomed into view in front of the ship [8]. Ortega bludgeoned Guncannon VB102's head with his Zaku I's heat hawk, declaring the Guncannons to not be mobile suits but playthings. Gaia brushed off a shot from Guncannon VB104 like nothing and bended his Zaku I over for Mash to stand upon and deal the final blow with a bazooka. The injured Erdush climbed out of his cockpit with a cracked helmet to see Ortega bludgeoning a Guncannon and collapsed. Captain Ral turned his Bugu around to see Gaia's Zaku I chasing an armless Guncannon VB103 and ordered him to let the Guncannon go, Gaia ignored the order and sliced the Guncannon's backpack reactor, causing it to fall on Dr. Minovsky [4].

Sometime later, at AE, Dr. Ray presented footage of the battle where the RCX-76 squadron they delivered were annihilated by merely five mobile suits, making the score 12 to 0 ― a complete shutout. Anaheim officials believed Dr. Ray, who was part of the project, was as much to blame. Dr. Ray agreed and used tragedy to his advantage in urging the management to advance the development of the RX-78 [4][9]. 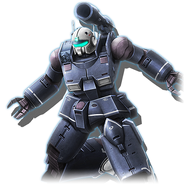 Retrieved from "https://gundam.fandom.com/wiki/RCX-76-02_Guncannon_First_Type_(Iron_Cavalry_Squadron)?oldid=505498"
Community content is available under CC-BY-SA unless otherwise noted.