The RB-79 Ball (ボール, Bōru?) is a fictional weapon from the anime series Mobile Suit Gundam.

The Federation refitted about 1200 of the civilian-model worker space pods, known as SP-W03 Space Pods. The Federation reinforced it with heavier armor and mounted a 180mm low-recoil cannon on top. The Ball mobile pod also had vernier thrusters mounted all along the body.

A standard EFSF combat team would consist of 3 RGM-79 GMs and 2 Balls to counter Zeon's 3-MS tactical units, though other formations have been seen; Ball-only teams of 1 RB-79K and 2 RB-79 launched from a Salamis-class cruiser, and various large formations launched from Columbus-class ships.

The directional thrusters mounted on all Ball units were "directed" solid fuel explosives, the detonation giving an impulse through the thrusters to change the direction of the Ball. This configuration gave the Ball unit good reaction speed and reasonable maneuverability on each thrust but very limited use of the system compared to the liquid fueled directional thrusters on mobile suits.

The Ball units had an advantage when it came to refueling on board the Columbus-class support vessel due to the lack of beam weapons and low number of liquid fuel thrusters, making the refueling/rearming time extremely short compared to any Mobile Suit that runs on thermo-nuclear power. In fact, the thrusters and weapons were designed to be modular, allowing depleted thruster banks and empty gun magazines to literally be removed by the servicing crew to be reloaded at a later time, and fully-loaded ones to be quickly installed in their place. Because it does not have a thermonuclear reactor and is driven by a fuel cell, it can be operated even on ships that do not have MS cooling facilities.

At first, the Ball was seen as ill-suited for combat. It had limited ammo, relatively thin armor (though sloped to assist in projectile deflection), and lacked the AMBAC system or any sort of close-in weapon other than its manipulator claws. The most famous battle involving Balls was Operation Star-One, an operation undertaken to further pressure Zeon into retreating from Earth after the Federation took the upper hand following Odessa. Since the GM was not yet ready, over 1000 Balls were committed along with Salamis-class and Magellan-class warships. Their numbers overwhelmed the Zeon fleets and drove them away, but countless RB-79s were destroyed during what turned out to be one of the most brutal battles for the Federation. Soon after, the Ball earned the nickname "Mobile Coffin" among EFSF pilots. It is sometimes joked that (in Gundam 0079) the only time a Ball ever hit anything was when one is kicked into a GM by a Zaku II.

However, some statistics on the unit counters this view of the Ball unit being weak - in fact, it had a specification superior to many of their opponents. The Ball was smaller than the average mobile suits, which not only made it a more difficult target to hit than a GM but also made it lighter as well as gave it a higher acceleration rate than most contemporary mobile suits. All of the supposedly very powerful mobile armors, save for a few Newtype units, had lower mass-thrust ratios (i.e. acceleration) than the Ball unit. All the earlier model space-combat mobile suits, specifically the Zakus and Rick Dom, had inferior acceleration and less sensor range. This gave the Ball unit a very good advantage in hit-and-run tactics even when not supporting GMs. The Ball's real advantage came from both numbers and cost. The Ball cost about 1/4 of a RGM-79 (next to nothing to the EFSF) and was heavily mass-produced, becoming a support unit for warships and RGM-79 GM's during the One Year War.

The concept for a combat mobile pod was initially devised as early as U.C. 0076 under the RX-76 project. However, development was put on hold until February 13, U.C. 0079, where the project was revived with renewed interest. The first RB-79 Ball was rolled-out in June of U.C. 0079. During the outbreak of the One Year War between the Earth Federation and the Principality of Zeon, the Federation lacked any sort of the mass-produced humanoid mecha, known as Mobile Suits. The Zeonic forces laid waste to the Federation with their mobile suits, the MS-05B Zaku I and the later MS-06F Zaku II.

To counteract this, the Federation scrambled to make some sort of mobile weapon that could counter the Zeon attack. However, their new prototype mobile suit, the RX-78-2 Gundam was too costly to mass-produce and their first mass-production mobile suit, the RGM-79 GM, just wasn't being fielded fast enough.

Thus, the RB-79 Ball Mobile Pod, was born. Easier to build and mass-produce, the RB-79 was soon on the front lines fighting the MS-06 Zaku II's and other Zeon Mobile Suits. Although lighter armed than its larger brothers, it was able to provide fire support and hold the line against the Zaku, until the GM's, Guntank, Guncannon, and Gundam came into the War. 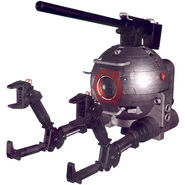 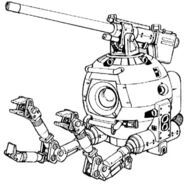 Breaking into Solomon with GM 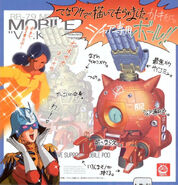 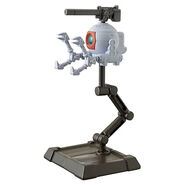