The RB-79N Fisheye was an underwater-use mobile pod used by the Earth Federation during the One Year War. It appears in the manga Mobile Suit Gundam MS IGLOO 603.

The Ball unit was also used in environments other than space. The RB-79N Fisheye was designed for underwater use. The generator output was increased to 425 kW(as compared to the 400 kW of the other Ball configurations) and a multiple barrel long spear launcher was mounted to replace the 180mm cannon. The manipulators were also enlarged for melee combat. This type also had a single propeller mounted on the back of the unit, instead of two thrusters. 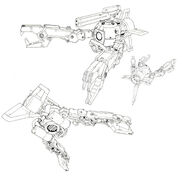 Retrieved from "https://gundam.fandom.com/wiki/RB-79N_Fisheye?oldid=496548"
Community content is available under CC-BY-SA unless otherwise noted.