The RB-79K Ball Type K is a mobile pod featured in the OVA Mobile Suit Gundam: The 08th MS Team. It is piloted by Shiro Amada.

The Ball Type K is one of the earliest types produced, and is superior to later mass production types in all aspects, including armor and propellant capacity. It is a prototype of the civilian maintenance modification for full-scale mass production, and therefore retains working equipment such as lights and winches. The winch can be used for a variety of purposes by replacing the anchor, so its use on the battlefield was also explored, but it was omitted in later production models. In the cockpit, a fire control system, various radars, a communication system, and a large monitor were added, and the seats and other parts were also replaced with military equipment.

The total production capacity of the Ball Type K is less than 100, but it has been deployed to convoys and orbital security forces. In the hands of Federation pilot Shiro Amada, it recorded possibly its greatest achievement by reaching a stalemate with the MS-06RD-4 Zaku High Mobility Test Type in satellite orbit. Amada achieved this by first sneaking up on the Zaku by using a large piece of debris as camouflage. When the pilot of the Zaku did notice, Amada used the rocket propelled winch to snag the enemy mobile suit and then proceeded to swing around the machine to entangle the Zaku in the grappling line and bringing the Ball's cannons within a point blank shooting range of the Zaku's head. When the Zaku's pilot tried to bring out her machine's heat hawk to destroy the Ball Amada was able to temporarily hold it off with the Ball's manipulator arm, but it proved too weak to resist the mobile suit's arm for long, but by then Shiro had destroyed the Zaku's head. Both machines were heavily damaged forcing the two pilots to escape and retreat.

Front;Being fired on by the Zaku High Mobility Test Type

Being destroyed by an Oggo

Attempting to fire on an Oggo 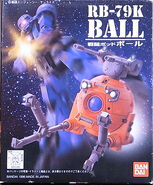 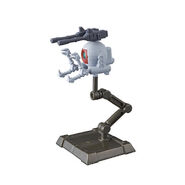