The RB-79G Ball Work Type is a mobile pod that appears in Gundam Crisis.

This green ball was developed at the end of the One Year War, and was equipped with a huge crane arm instead of the cannon armament, and an pair of additional sub-arms were added to the working arms to enhance its performance for work. It is mainly useful at construction sites.

In the manga "Mobile Suit Gundam 0083 Rebellion", in U.C. 0083, several civilian volunteers belonging to Moon Base are engaged in clearing the wreckage of the Side 5 reef space. One of the machines is boarded by a spy from the remnants of the Principality Army, and is destroyed after being transferred to the MS-21C Dra-C that comes to pick them up.

In the manga "Gundam Legacy," in the U.C. 0084, Matt Healy and May Kauwin boarded the Silver Lance, a nuclear pulse propulsion booster for interplanetary cruising developed by the remnants of the Principality Army, and drove a wire with an anchor attached into it, penetrating its interior and deactivating it. 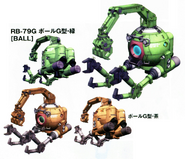