The RB-79F Ball Type F (aka Ball Increased Armor Type) is a variation of the RB-79 Ball and first appeared in the design series MSV-R.

A modified version of the Ball developed by the Earth Federation Forces. It was developed to reduce the rate of wear and tear on the Ball, and is also known as the "Ball Increased Armor Type".

This machine was developed using the RB-79-YC plan, which was the least time-consuming and most effective of the three modification plans presented by the technical team in response to the Federation Forces' request for modification. The reason why this plan was adopted was because it was possible to produce the Ball without changing its production line, and only needed to improve the production line for additional equipment. It also had the clear advantage that it would be relatively easy to modify already deployed units.

Armor plates were added to various parts of the machine to improve its defensive performance, and a booster pack with propellant tanks and thrusters was installed on its back to improve its mobility. It is said that this machine, when rolled out, demonstrated the expected high maneuverability, and was well received by the pilots.

In the manga "Mobile Suit Gundam Side Story: The Blue Destiny", it is used by Alph Kamra when he infiltrates the colony where the EXAM System research facility is located. 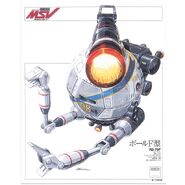