The RAG-79 Aqua GM is an Earth Federation Mobile suit introduced in Kunio Okawara's M-MSV series. It was eventually redesigned by Hajime Katoki as part of Harmony of Gundam and later appeared in Mobile Suit Gundam Unicorn.

An amphibious mobile suit developed by the Earth Federation Forces during the One Year War to oppose the Principality of Zeon's amphibious mobile suits, the RAG-79 Aqua GM was based on the RGM-79 and incorporated data from the RGM-79U GM Sloep. The Aqua GM has hydrojet units equipped in its backpack, shoulders and legs for underwater propulsion, with nozzles for the hydrojet units also present on the soles of the feet. The output of these hydrojet units were superior to the Zeon's MSM-07 Z'Gok, but lower than that of the MSM-03 Gogg's. The Aqua GM was also fitted with weaponry more suited for underwater combat, such as torpedo pods, missile launchers, special beam picks, etc. due to regular beam weaponry's reduced effectiveness in water. Its head was also reinforced to better withstand the underwater pressure.

Unfortunately, the Aqua GM's rushed development led to it being an unbalanced and unwieldy machine. Furthermore, the use of the general-purpose GM as the base unit meant that the Aqua GM was unable to fully adapt to the very unique underwater environment. As a result, the Aqua GM's combat performance failed to match that of the Zeon's amphibious mobile suits. Because of this, the Federations Forces decided to develop a more capable amphibious mobile suit in the form of the RAG-79-G1 Gundam Marine Type based off the GM Aqua. Nevertheless, the Aqua GM is still useful for coastal defense and destruction of enemy naval vessels. With the end of the war, the importance of amphibious mobile suit declined and no successor to the Aqua GM was ever developed, causing the machine to remain in service in U.C.0096, even as it is clearly obsolete.

A hand-carried large missile launcher, it is the primary weapon of the Aqua GM and is useful against enemy ships and mobile suits. It is loaded with two large anti-ship torpedoes in the center and has a 5-tube launcher on both sides that fire small missiles.

Four torpedo pods are mounted at the top of each shoulder for attacking underwater enemy units.

One mounted on each forearm, it is a wired grappling claw that can be launched to grab enemy units for various purposes such as pulling them closer to the Aqua GM or to restrict their movements. It can also be used to anchor and stabilize the Aqua GM in areas with dangerous water currents.

Among the Aqua GM's weapons designed for use in the water are its beam picks. These close combat weaponry are similar to beam sabers but have several differences. They are equipped with a mechanism that generates a short beam blade only when they come into contact with the enemy's armor to prevent heat loss in water. This need to approach the enemy unit so closely makes them unpopular with Aqua GM's pilots. The Aqua GM carries four beam picks, two stored on the left and right side armour.

Originally designed for the RAG-79-G1 Gundam Marine Type, this weapon is an attempt to improve the combat performance of the Aqua GM. Usable underwater or on land, the harpoon gun fires four harpoons one by one in a rotary manner similar to a revolver. The tip of each harpoon is loaded with explosives that detonate once the projectile has penetrated the enemy's armor. This mechanism ensures the weapon's destructive power is maintained underwater. When required, it is also possible to thrust the harpoon gun and try to impale the enemy unit directly with one of the unfired harpoons.

An unknown number of Aqua GMs were produced and participated in the One Year War. Due to a decline in the importance of amphibious mobile suit after the war, the Aqua GM remained in service for decades.

In U.C. 0096, several Aqua GMs deployed by the Juneau-class submarine Bonefish were attacked and destroyed by two AMS-129M Zee Zulus and the mobile armor, AMA-X7 Shamblo. Several more Aqua GMs were deployed in and around the coastal areas of the Earth Federation Forces's Torrington Base, and were easily destroyed when the base was attacked by a number of old amphibious mobile suits piloted by Zeon remnants alongside the Zee Zulus and the Shamblo.

In the manga, Mobile Suit Gundam Unicorn: The Noble Shroud, two Aqua GMs and a RAG-79-G1 Gundam Marine Type fought with and were defeated by the Zee Zulus while the Shamblo and the other Zeon remnants' mobile suits assaulted Dakar.

On the deck of a Himalaya-class carrier

Using hand anchor on the Shamblo 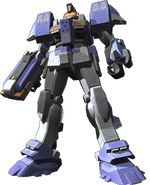 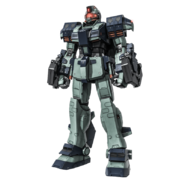 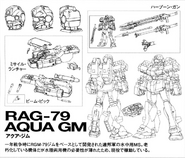