The RAG-79-G1 was a re-designed Aqua GM. The machine body was tuned for use by an ace pilot. It also incorporated design data from the Gundam Local Type, and because its head was designed to resemble that of the Local Type, it too became commonly known as a "Gundam" [2].

A vectored beam rifle (偏向ビーム・ライフル, vectored beam rifle?) [4][2]. Presumed for underwater use, this specialized marine type rifle has a barrel with a shape that allows it to focus the beam precisely, there's also a removable rifle cover [5].

Among the Gundiver's weapons that are designed for use in the water are its Beam Picks (ビーム・ピック, Beam Picks?) [2]. Beam Picks are like Beam Sabers but with a shorter blade and the Gundiver has two Beam Picks that can be stored on its right waist [5].

The right arm is equipped with a Hand Anchor that the Gundiver can shoot [5].

Though the Y-02 Development and Training Team was disbanded not long ago, its members continued their mission to test new weapons and mobile suits from the Dark Colony all over the world. Two of its members, Kalka and Hjal Mar, were assigned to the Black Sea defense force, with Kalka piloting a Zaku I armed with an ASR-78 MS Anti-Ship Rifle (modified for ground-use) and Hjal Mar test piloting an MSM-03 Gogg. Suddenly, they came under attack by the Federation's aquatic mobile suits: two Aqua GMs and a new model which they had no data on.[3]

However, the Gogg was undamaged thanks to its thick armor. Hjal Mar briefly contemplated staying there until the battle's over, before deciding to go after the Gundam. He grabbed onto the Gundam as it attempted to break free, even ramming into the ship that Kalka was on. In order to protect the ship, Kalka fired at the two, shooting through the Gogg and damaging the Gundam Marine Type, forcing it to retreat. The Gogg was able to survive as well, only losing an arm in the process.[7]

However, this entire operation was actually a feint by the Federation Forces to attract the attention of the Zeon navy: they had already taken over the east coast of the Bosporus Strait days ago, and thanks to this distraction, they were able to draw away the Zeon navy and take over the west coast as well, clearing the obstacle to Odessa.[7] 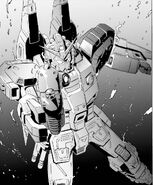