The Gundam Marine Type is a fully customized RAG-79 Aqua GM used by the Federation. Although the unit is built from the same basic frame of the Aqua GM, it was adapted with more advanced technologies during its development to improve its adaptability in amphibious combat.

One such feature is the improved Minovsky type reactor, which is custom designed to work underwater and allows it to use beam weapons while underwater. Other such improvements in performance is the increased power in the thrusters, allowing it to cruise underwater without problems. In design wise, the unit is designed with a Gundam-Like head to reflect the famous RX-78-2 Gundam.

Located on the back are two torpedo pods.

Located on the left forearm, a directional explosive is built into the tip of the harpoon to destroy the enemy MS from the inside.

A rocket anchor weapon equipped into the Gundam Marine Type's right forearm for close combat purposes. It has a grappling claw that can catch enemy units to pull them into the suit's combat range. It can also be used to restrict the movements of an enemy mobile suit.

A modified beam rifle that can be used underwater. The beam rifle is fitted with a curved cover to narrow and converge the beam, which reduces the loss of the beam in the water. 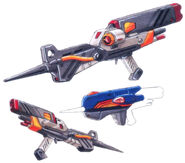 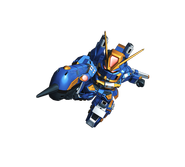 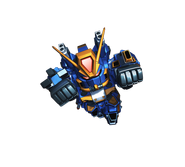 Retrieved from "https://gundam.fandom.com/wiki/RAG-79-G1_Gundam_Marine_Type?oldid=452598"
Community content is available under CC-BY-SA unless otherwise noted.