The QRX-006 Geminus, also known as Blue Rose,[1] is a Mobile Ship. It was featured in episode 9 of Gundam Evolve.

A massive experimental mobile weapon developed by the Titans, it is piloted by six Newtype's on board. The Geminus's intermediate form is that of a giant octahedron; however, it is capable of transforming into a more traditional mobile suit form. The Geminus featured a large number of weapons, including remote control arms, a large arsenal of mega particle weapons, and compact psycommu-controlled mobile suit units called "Hasta", which could execute all-range attacks. The Geminus' most powerful weapon, the scattering mega particle cannon, had the ability to hit targets on earth from space with devastating accuracy, and therefore is considered to be the first mobile armor in the UC era capable of doing so. 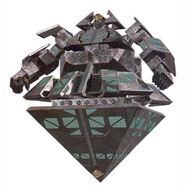 
Cite error: <ref> tags exist, but no <references/> tag was found
Retrieved from "https://gundam.fandom.com/wiki/QRX-006_Geminus?oldid=428236"
Community content is available under CC-BY-SA unless otherwise noted.