Professor H (Ｈ教授, H Kyōju?) is the engineer and creator of the Gundam Sandrock and Quatre's mentor, he is an expert in Mobile Suit cockpit systems. He is rather fat, with a receding hairline and a thin, dark mustache that stands straight out at each end.

Professor H was one of the five OZ scientists working on the prototype Tallgeese. All became disillusioned when the Alliance began tightening its hold over the colonies. They left OZ and separately went to their own colony, to construct their own personal Gundam to retaliate against OZ, who were the controlling power behind the Alliance. The plan was called Operation Meteor, a plan created by Dekim Barton to drop colonies onto the Earth, causing mass murder on a global scale. However, four of the five scientists, including Professor H, rejected the plan and told their respective pilots to ignore the plan and instead attack OZ bases only.

In A.C. 193, Professor H was captured by the Alliance and forced to work in the resource satellite MO-III, it was there where he met Quatre for the first time, when the young heir's shuttle was hijacked by the Maganac Corps. After learning of the youth's strength and resolve, he ended up taking a job as Quatre's tutor while borrowing Winner family resources to construct Sandrock. Realizing that he couldn't undo Quatre's kind nature, he rejected Operation Meteor and sent the boy to Earth to join the Maganacs. He appears to be the most reluctant of the engineers to reveal information on the Gundams. Professor H is responsible for leaving the blueprints of Wing Zero behind in the facility where he developed the Sandrock.

H was reunited with his fellow scientists after OZ tracked them down. Lady Une forced them to construct mobile suits more powerful than the Gundams and the Tallgeese combined.

Professor H was killed with the other engineers on Peacemillion in their attempt to stop Libra from crashing onto Earth. 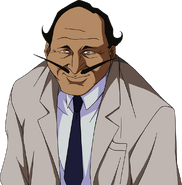