The Gundam Wiki
Register
Don't have an account?
Sign In
Advertisement
in: Stubs, Characters, After Colony characters, Male

Professor G was an engineer and the creator of Gundam Deathscythe, as well as co-creator of the spaceship Peacemillion and Duo's mentor. He is distinguished by his long nose, mushroom-shaped hair and a long scar on his cheek. He was sardonic and, like Doctor J, rather eccentric, he tended to describe Deathscythe as "the ultimate work of art", perhaps due to his specialization in stealth systems.

A member of the Sweeper group, he was impressed by Duo cracking his security codes and offered to train him as a Gundam pilot. When Duo refused to go along with Dekim Barton's original Operation Meteor, planning on destroying Deathscythe, killing everyone in the factory, including himself, Professor G caught him in the act, just as his detonator failed to work. G told Duo to steal Deathscythe and fight the Alliance on his own terms. He also advocated Howard's assistance.

Professor G was the first of the scientists to be captured by OZ. They presumed him to be the developer of all the Gundams but he confessed that he only built Deathscythe. Soon enough, he is reunited with his fellow scientists, all commissioned by Lady Une to create mobile suits more powerful than the Gundams. Together, they built the OZ-13MSX2 Mercurius and OZ-13MSX1 Vayeate, both with respective defensive and offensive capabilities.

However, in secret, the scientists were also secretly reconstructing Deathscythe and Shenlong as Altron. When Duo manages to infiltrate the lunar base, Professor G promises him that they will be completed in a month. But for now, they had to beat him up before imprisoning him in order to hide the secret project. Chief Engineer Tubarov disapproved of Une's use of the pilots and the scientists and attempted to suffocate them. However, Une returned to save them.

G and his fellow scientists were captured by the White Fang and forced to work for them. Neat the end of the Eve Wars he and the other scientists purposefully kill themselves in the re-activation of Peacemillion's engines in order to prevent Libra from crashing into Earth.

He appears to have a good relationship with Duo, encouraging him to steal the mobile suit he created. He doesn't interact with any other Gundam Pilots so nothing is known if he likes the others or not.

He appears to get along with his fellow Gundam Scientists, but seems to be more cantankerous than some of the others. 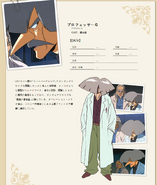 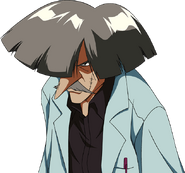