The Primrose II is an escape pod that appears in the novel Advance of Zeta: The Flag of Titans.

The Primrose II serves as the escape pod of the RX-124 Gundam TR-6 [Woundwort]. It is equipped with autonomous navigation capabilities and constitutes the chest of the Woundwort. It features a cockpit unit equipped with a control system (BUNNyS) that forms the core of controlling the retrofitting of reinforcement parts for TR-based mobile suits [1]. The BUNNyS system is capable of upgrading MS performance to that of next generation class or higher[1]. Its structure is based around a Drum Frame that corresponds to the spine and waist of the MS[1]. The lower body and backpack are attached to the Drum Frame to form an MS[1].

Like the original Primrose escape pod, the Primrose II is capable of independent flight, unlike the ejection pods installed in ordinary mobile suits, so the pilot’s chances of survival are dramatically increased, and can be equipped with option binders that permit the attachment of weapons such as mega particle cannons, missile pods and manipulator arms. The Primrose II has parts which are structurally common to the MP-02A Oggo mobile pod produced by the Principality of Zeon[1]. 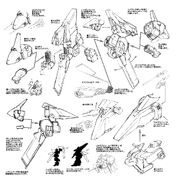 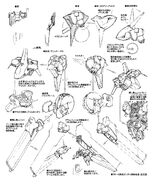