Prayer is a young boy with high spatial awareness, under the tutelage of Reverend Malchio, who called him "The Son of Destiny". Prayer's origin, who cloned him and why, are a mystery. He also suffered from the painful effects of his genetic flaws like Rau Le Creuset and on one occasion, he had a memory of piloting the TS-MA2mod.00 Moebius Zero mobile armor, but it is unclear whether this is his own memory or a result of something else. He also had the ability to send psychic messages.

Prayer was dispatched by Reverend Malchio in July, C.E. 71 to take possession of the dismantled YMF-X000A Dreadnought Gundam (ZAFT's experimental DRAGOON-use mobile suit) and bring it back to Earth, so that the Reverend can use its N-Jammer Canceller technology to end the energy crisis on Earth. Unfortunately, the N-Jammer Canceller within the suit is stolen on the way by Serpent Tail, who has been employed by Siegel Clyne with the task of ensuring the dangerous technology is used correctly. After confirming that what Prayer did is not against Siegel's wish, Serpent Tail returns the N-Jammer Canceller.

Using the YMF-X000A Dreadnought Gundam, Prayer fought several battles against Canard Pars and his CAT1-X1/3 Hyperion Unit 1; Canard himself is considered a failure because he is the only failed "Ultimate Coordinator" "prototype" to survive. In between his battles with Canard, Prayer saved Morgan Chevalier from death by sending a psychic message. Canard's Hyperion Unit 1 is eventually destroyed, but Prayer protects Canard from the explosion of Hyperion's nuclear reactor. Unfortunately, Prayer later dies from the effects of his failed cloning. In Mobile Suit Gundam SEED C.E. 73 Δ Astray, it is shown that Prayer was with Matias before going to Reverend Malchio.

A man with similar appearance as Prayer appears in Mobile Suit Gundam SEED Destiny Astray. His first appearance was meeting Setona Winters while she was traveling around. He also appeared to guide the lost Yoon Sefan. Later an apparition of Prayer appeared to Canard in his sleep and asked for a favor. Subsequently, the apparition had a talk with Kazahana Aja, seeking her help in assisting Jess Rabble. When Canard was about to shoot down one of the attackers assaulting Genesis Alpha, the apparition appeared to calm him down.

The Carbon Human Prayer reappears in Mobile Suit Gundam SEED VS Astray as a prime member of Librarian Works. This Prayer's aged appearance is due to the original's genetic "defects" (short telomeres), which were reproduced in his new form as rapid aging. This Prayer also knows Matias, as he wears a coat similar to one worn by Matias and has a picture of his younger self together with Matias in one of his rooms. Although he holds a high position in the organization, he does not agree with its goal and works secretly in the dark to sabotage its plan. Apparently, he dislikes the creation of outstanding soldiers/MS pilots using the Carbon Human techniques, and wants to show that the Carbon Humans are not as perfect and useful as their creators intended. Carbon Human Prayer later reveals in the end of the story that due to rapid aging his days are numbered. The Carbon Humans (possibly including Prayer) were then transported to Mars by the recommendation of Lowe's group.

In SD Gundam G Generation series and Gundam Wars card game, due to a more user friendly setting, he is listed as a Newtype instead of a different ability of spatial awareness. Nevertheless, this is not the official story settings. Prayer has also made his Super Robot Wars debut in the Nintendo DS game Super Robot Wars W.

Prayer also appears in Gundam Evolve 6. He experiences a nightmare vision of what would happen if he lost control. 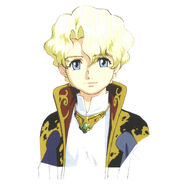 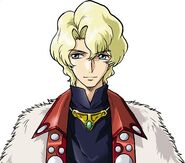 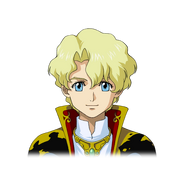