A positron reflector (陽電子リフレクター, Yōdenshi Rifurekutā?) is a defense system used in the Cosmic Era timeline.

A positron reflector is an energy barrier that uses a field of positrons to block beam and physical weapons. It is derived from the "Armure Lumiere" used by the Eurasia's CAT1-X Hyperion Gundam series, but is much more powerful and can block the attack of a Positron Blaster Cannon. Despite its immense defensive capabilites, it is however vulnerable to the beam spike-equipped DRAGOON units of the ZGMF-X666S Legend Gundam as well as the offensive use of the "Armure Lumiere" as demonstrated by YMF-X000A/H Dreadnought H when it defeated a YMAG-X7F Gells-Ghe. The latter also hints that positron reflector may have the same weakness as the "Armure Lumiere". It can also be penetrated by a beam shield and Akatsuki’s Yata-no-Kagami.

The reflector technology is used almost exclusively by the Earth Alliance and installed on most of their newest Mobile Armors. It is first used by YMAF-X6BD Zamza-Zah and subsequently by YMAG-X7F Gells-Ghe, and then later by the mass-produced TS-MB1B Euclid mobile armor. Also, the massive GFAS-X1 Destroy Gundam uses several positron reflectors mounted across its body. Lastly, the Alliance creates larger reflector emitters and installs them on the bow of Drake-class ships.

After the end of the First Alliance-PLANT War, the Earth Alliance invented a new type of defense technology to protect against even the most powerful conventional energy weapons. This technology was called positron reflector and as its name implies is mainly used to defend against the powerful beams of Positron Blaster Cannons. In CE 73, the reflector technology was eventually installed on the prototype mobile armors Zamza-Zah and Gells-Ghe.

The prototype Zamza-Zah was first fielded against the ZAFT battleship Minerva and used its positron reflector to protect itself and a fleet of ships against an attack of the Minerva's "Tannhäuser" positron cannon. Nevertheless the Zamza-Zah was eventually destroyed. The prototype Gells-Ghe on the other hand was used to protect the "Lohengrin" gate of the EA in the Gulnahan Ravine, where it proved to be capable of deflecting the combined attack of several ZAFT forces against the gate. However, like the Zamza-Zah, the Gells-Ghe was destroyed by the mobile suits of the Minerva. Several months later, the two mobile armors were put into limited mass production and used to defend the EA Daedalus lunar base. They were also destroyed.

When the massive GFAS-X1 Destroy Gundam is fielded, it is shown that this suit mounts a total of three positron reflectors, rendering it virtually impervious to the weapons of the ZAFT mobile suits and land battleships occupying central Eurasia.

After the Requiem attack on PLANT during the Second Alliance-PLANT War, ZAFT attacks the relay stations of the superweapon, which are however protected by several Drake-class ships equipped with massive positron reflectors. Also the mass-produced mobile armor Euclid is fielded, which is based upon the data gathered from the Zamza-Zah and Gells-Ghe. Like the prototype units, the Euclid mounts a positron reflector.

Afterwards, ZAFT took control over Requiem and used it to destroy the Arzachel Lunar Base of the Earth Alliance as well as a great part of their fleet. It is shown during this time that the beam emitter is equipped with Positron Reflector units. However, it is unknown if this is part of the original EA design or if it is a new addition by ZAFT. 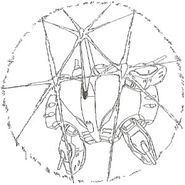