Poe Aijee (ポゥ・エイジ, Poe Aijee?) is a fictional character from the Turn A Gundam anime.

Almost a running gag in the series, Poe has great difficulty keeping her emotions under control and will weep hysterically every time she is unsuccessful in battle.

A subordinate of Phil Ackman, Poe first appears when the Dianna Counter first lands on Earth as part of The Return (two years after Loran Cehack and other Moonrace scouts were sent to Earth to investigate living conditions). She is responsible for causing conflict between the Moonrace and Terrans after shooting her WaDom's beam weapon at the Inglessan town of Vicinity (killing Dylan Heim and other civilians). In order to prevent being put in cryostasis for insubordination, Phil offers Poe a chance to redeem herself by helping him track down the mysterious mobile suit, the "White Doll", that appeared the night of her unnecessary attack. Later on while under his command, Poe pledges to assist Phil in overthrowing Dianna Soreil after Phil defects from his queen's goals to annex the Sunbelt Region without military force. Phil even tells Poe that once he is able to get rid of Dianna, he will make Poe the new queen of the Moonrace. This reinforces Poe's allegiance and attraction to her commanding officer even though she is repeatedly intercepted by either Loran Cehack or Harry Ord. 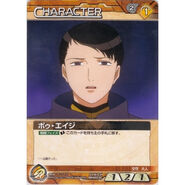 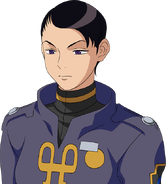 Retrieved from "https://gundam.fandom.com/wiki/Poe_Aijee?oldid=468138"
Community content is available under CC-BY-SA unless otherwise noted.