The Pluma (プルーマ, Purūma?) is an unmanned subunit of the Hashmal that appears in the second season of Mobile Suit Gundam IRON-BLOODED ORPHANS television series.

Although it looks similar to a mobile worker, the Pluma is an unmanned, small, sub-unit produced by the Hashmal.[1][2][3][4] Besides a pair of claws on its arms, it is also has a drill on its tail and a concealed railgun underneath its singular red eye.[2][3][4][5] A single Pluma is no match for a mobile suit, but as it move in groups, they can easily decimate production plants, human beings and even mobile suits.[6] In melee combat, the Plumas close the distance via hovering, then leap or fly as they launched their attacks.[6] They also tend to attack from various directions, confusing the enemy with their tricky movements.[6] Thanks to the thrusters on various parts of its body, the Pluma is capable of agile movements.[7]

The Pluma moves by receiving power supply from the Hashmal via microwaves, and has a hatch at the top that serves as the energy receiver.[1][3][6][7] It operates based on orders from the mobile armor, and will stop functioning if the latter is destroyed.[1][3][6] Aside from serving as attack units, and protecting the Hashmal, they can also carry out other functions such as scavenging - collecting resources such as fuel, propellant, and other materials to resupply and even repair the Hashmal.[2][3][4] The Hashmal in turn can manufacture new Plumas with these resources.[2][3][7] With enough time and materials, they can multiply infinitely.[2] Data of the surrounding area collected by each Pluma is also transmitted in real time to Hashmal.[1] Although the Plumas have a form distinct from the Hashmal, from a system point of view, they are still considered a part of the mobile armor.[1]

Located under the Pluma's red eye, behind a pair of shutters, the railgun has low firepower, but the Plumas compensated for this by firing their railguns in a tight formation.[3][6][7]

A claw is mounted on each arm. 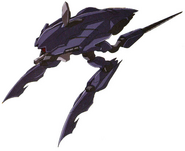 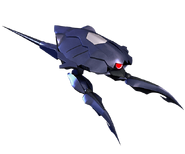