A jovial veteran who is talkative and cracks jokes even in battle. Although he has some problems with his attitude, he is a skilled pilot. In the manga version, he has a pattern on the left chest of his GM that looks like a personal mark. He retired from the military after the Gryps War, and moved to Side 6 to run a bakery. In the 2015 manga, he plays an active role as a member of the Guinea Pig squad with Yuu and Summona as in the original story. After Yuu becomes the pilot of the Blue Destiny 1, he takes over his previous machine, the GM Dominance. He also has a girlfriend named Jill, but he is unaware that she is a Zeon agent. 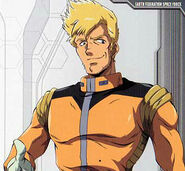 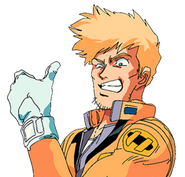