Patrick Zala (パトリック・ザラ) is a member of the PLANT Supreme Council and father of Athrun Zala.

Patrick Zala seems to be a charismatic man and capable leader, he eventually take over as PLANT Supreme Council Chairman. While it isn't known how he was prior to the start of the war, it's easy to say that the death of his wife in the Bloody Valentine Incident transformed him into a bitter and vengeful man. He once makes it clear to the PLANT Supreme Council Chairman at that time, Siegel Clyne, that no Natural should be left standing, they must be wiped out for the sake of all Coordinators. As the war progressed, he became more paranoid, and had no qualms killing those he believed to be responsible for the major losses suffered by ZAFT. He even shot at his own son when the latter disagrees with him.

Patrick Zala was born in C.E. 23 in the Atlantic Federation. As the genetic enhancement procedure was still illegal around the world at the time, he like many coordinators his in generation was born "illegally". Later in life, he moved to Lagrange Point 5.

In C.E. 43, Patrick met Siegel Clyne in Lagrange Point 5. A few years later, when coordinator population exceeded ten million, anti-coordinator organizations began carrying out acts of terrorism. Which caused Siegel and Patrick, along with others in the colonies to become increasingly dissatisfied as time goes on and the attacks continued.

In the 50s, Patrick laid the foundation of his lifework. Patrick and Siegel founded the political advocacy group Zodiac Alliance in C.E. 50, with the aim of obtaining autonomy, and independence for PLANT colonies. The two worked to abolish food production restrictions and secure self-defense rights for the PLANT, but their work is suppressed by the Sponsor Nations of PLANT, forcing the group to go underground. Despite the suppression, the Zodiac Alliance continued to grow its power and influence, attracting more followers. In C.E. 58 Patrick and Siegel was elected to the PLANT supreme council.

In the 60s, the call for independence within PLANT grew ever louder, and Patrick rose to prominence as one of the leaders of the independence-seeking PLANT. In C.E. 63 Patrick and Siegel became the leaders of a Supreme Council faction which seeks independence from the Sponsor Nations, at the same year, militarization as well as research into mobile suit's military application also began in secret. In C.E. 65, Zodiac Alliance rebranded itself to Zodiac Alliance of Freedom Treaty(ZAFT). In C.E. 68, ZAFT is reorganized under Patrick's leadership, and combined with the PLANTs' domestic security operations to become a military organization equipped with mobile suits. He also called his son, Athrun Zala, back from Copernicus, due to the deteriorating situation.

During the first war, Patrick initially served as the national defense committee's chairman. When Rau Le Creuset and Athrun return to debrief over the events at Heliopolis, Patrick is seen sitting in their shuttle. He makes it clear to them that they didn't see him. He also slips to Athrun that he had omitted the fact that the Strike is being piloted by an Orb Coordinator, so as not to incite interference from the moderates.

Prior to a council meeting, Patrick met with Siegel, making it clear that they must wipe out the Naturals and the Coordinators must take their place. Siegel counters that third-generation Coordinators exhibit lack of fertility; Patrick says that the PLANT scientists will figure out a solution and refuses to allow humanity to revert to being Naturals.

Because of his strong desire to end the war, Patrick became a popular figure, allowing him to replace Siegel in the upcoming election and become the next Chairman. His rise to power as the Chairman of PLANT gave him great military power, which he used in Operation Spitbreak. Officially, the operation was to take out the Alliance's last mass driver at Panama; unofficially, he had his forces deploy instead to take out Alliance headquarters JOSH-A, without the approval rest of the PLANT Council. However, Rau secretly leaked intel of this attack to the Alliance, which compelled Blue Cosmos to sacrifice the Eurasian forces with the Cyclops system to eliminate half the attack force. The failure of Operation Spitbreak greatly angered Patrick.

Believing that the moderates had betrayed him, he ordered their arrest and if necessary, death in which he had Siegel killed. He got even more furious when Siegel's daughter, Lacus Clyne, gave a new mobile suit, the Freeodm, to Kira Yamato, whom he presumed to be an Alliance spy. He sent Athrun in the new Justice after the Freedom and gave him strict orders to use extreme measures of eliminating the pilot and anyone else that comes into contact with the suit so the details of the Freedom's key component, the Neutron Jammer Canceller does not fall into the hands of the Alliance. But when Athrun returned without either suit, he shot his own son, when he refused to divulge the location of the Freedom and Justice. However, Athrun was rescued by members of the Clyne Faction, who stole the FFMH-Y101 Eternal for their escape.

Eventually, word of the Alliance's destruction of Boaz through use of N-Jammer Canceller technology reached the PLANTs. Patrick cursed the Naturals for such barbaric actions. During the Second Battle of Jachine Due, Patrick unveiled the GENESIS, a superweapon designed for ending the war. The first shot destroyed most of the Alliance fleet, the second took out the reinforcements and the lunar base of Ptolemaios. However, Patrick became infuriated that the Alliance was still fighting and that not even ZAFT could stop the Three Ship Alliance, who were attempting to stop such genocidal actions.

Patrick later tells the Jachin staff to target GENESIS on Atlantic Federation capital, Washington. Ray Yuki protested such an action, as it would wipe out half the life on Earth and destroy the surface; Patrick responded by shooting him. He justified to his troops that the enemy is still out there and they must destroy them all; one of his aides pointed out that their space forces were still in the line of fire; Patrick stated that all their forces were fighting for one thing - victory. He is then shot by Yuki, who then dies. Athrun and Cagalli then come into the control room to find Patrick's floating body. With his dying breath, he tells Athrun to fire GENESIS, to make the world for Coordinators. However, Athrun doesn't and detonates the Justice inside the superweapon. Patrick's body is then annihilated by Jachin Due's explosion. Afterwards, Eileen Canaver takes over and opens negotiations with the Alliance.

Even in death, Patrick's influence remained in a number of radicals who used the remains of Junius Seven as a weapon, dropping it on Earth.

Lenore Zala - His wife prior to the start of the series. It's unknown what kind of relationship he has with his wife, although when she was killed in Junius Seven, Patrick changed. It was through her death, which led to his ambition of becoming chairman and leader of ZAFT, as well as his undying hatred of Naturals and a desire to get revenge, even if it meant destroying the Earth using GENESIS.

Athrun Zala - His only son. Patrick sent him to the ZAFT Military Academy, where he became the top of the class and part of the ZAFT Military. He has somewhat a shaky and difficult relationship with his own son, as he wants Athrun to follow all his commands, without question. To him, his own son is but a tool to eliminate all of the Naturals and get revenge for his wife's death. Some would hint that he arranged Lacus to be engaged to Athrun, to gain more political premise within the PLANT Supreme Council. In the end, he disowned his own son for defecting to the Clyne faction and once tried to shoot him. 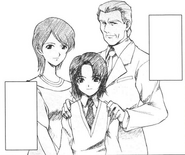